I don’t know if the devs are already aware of this but it’s possible to sneakily camp slot machines in the casino. It’s not against the rules but I still think this should be discouraged. So what I’m talking about is this: 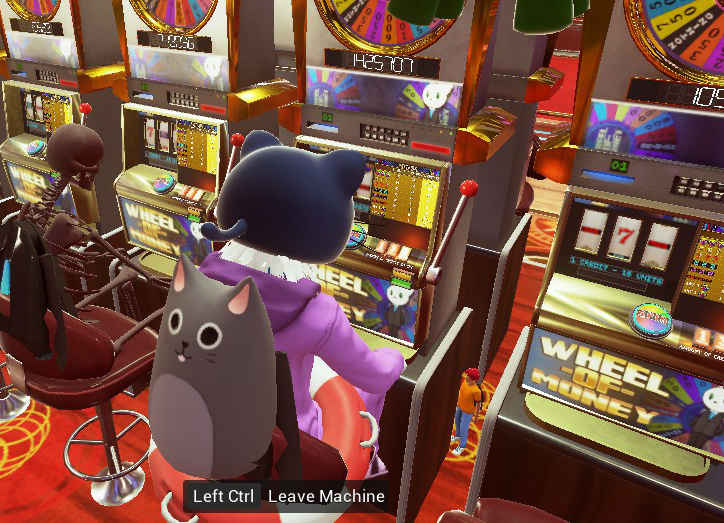 You can use a tiny potion and an auto clicker to camp the slots from behind. As soon as you leave the machine, either because the anti-macro gets confused or because you were AFK they’ll instantly take the seat.

I propose we put an invisible floor above the slots so that you can’t get behind them. If you’re gonna camp then do it like a man: while creepily standing behind me, staring at the slots with cold dead robotic eyes.

Or as an alternative we could implement a system where if you click on a taken seat one too many times you get thrown back to the transit station.

There was a bug where people would stand behind the slot machines and it would lag the person on them iirc. A couple people got temp bans from that.

Uhm… pay attention, don’t go afk and you won’t get kicked
that’s the entire point of the anti-afk/anti-macro system

That’s not exactly what I have a problem with. It’s that you can get behind the slot machine and stealthily camp it with something like an auto clicker (which is strictly forbidden by EULA) without being noticed (and thus reported)

The anti- AFK and macro check can be a bit finicky sometimes. You could be typing something in chat when it pops up and thus instantly hit the wrong key and get kicked out.

But they can just as easily do it from the front of the machine and you’d still have no way of knowing if they are using an auto clicker. Seems to me you want to report people for using auto clickers if they stand behind you for too long. Either way this isn’t a bug and shouldn’t really be in this section.