I’ve been playing tower a lot lately and this only seems to happen mainly in the Condos, or at least the Condos radically speed up the memory leakage.

I have 128GB of memory and on average the game runs at 23-26GB which is a lot on its own, after about 4-6 hours in my condo the game maxes out my memory at around 106-108GB before hanging, if left my whole system hangs and the game crashes to desktop after a while. Keep in mind, my condo has 530+ workshop items which may or may not affect this issue.

From as far as I know the only way to reproduce the issue is to be within a condo for 4 - 6+ hours, a potential reason may be that my condo has 530+ workshop items, so keep that in mind

I expected the condo to just work as intended 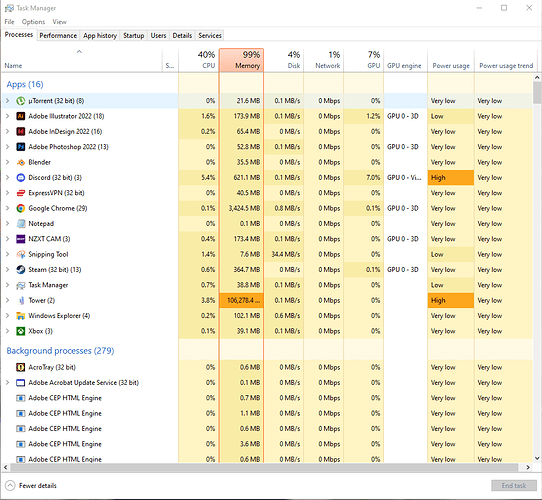 holy crap, i wouldnt be surprised if you had several performance problems with that many, you should try to also see how optimized some of those items are by checking the file size when you hover over it in edit.

I mean I’ve been able to brute force through it, my specs are fairly beefy so performance in my condo isn’t the worst, but some friends with lower spec pc’s have complained about my condo crashing their game when they’re loading it all in