Due to either the lastest version of TU or Steam itself - I managed to get Level 100 in Ball Race. As a result of gaining this level - you’re presented with two rewards. These two rewards however have somehow managed to be dupelicate themselves. I’ve now got 2 Ball Race: Diamond Trophy and 2 Galaxy Orb items in my steam inventory.

I don’t really understand how or why this happened. I believe I was playing Ball Race and reached level 100. Upon rebooting the game - my progress had dropped down from level 100 to level 98 (it is almost as if the 2 levels didn’t actually save onto my account whereas the items granted did) which appears to have created the dupelication. I believe it might have something to do with the servers being overloaded at the time of playing.

The normal behaviour would entail the items being granted to the account and that would be that. I should only have 1 of each item (Ball Race: Diamond Trophy and Galaxy Orb).

As stated previously - I now have 2 of each item. I guess this won’t really affect anything in the grand scheme of things but… best to make it known right now while it is still fresh on my mind. I would be fine with having 1 of each item removed from my account though. 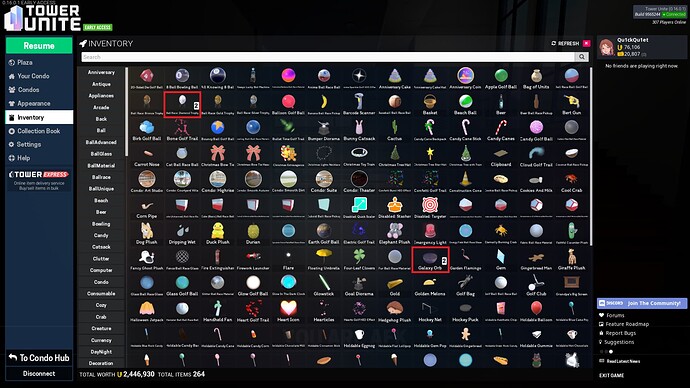 If you log into the Tower Express site and purchase an item, it’ll automatically remove any duplicate milestones for you.

I’ll try that shortly. I’m normally not bothered by dupe(s) but… these items in particular just shouldn’t be coming up twice for obvious reasons.

Thank you for the heads-up.

EDIT #1: I can confirm that purchasing anything from the Tower Express Website has removed the two dupelicated rewards.