When a player gets banned from your condo the popup won’t display the reason that you typed in.

Get banned from a condo and have the person doing the banning input a reason.

For it to say BANNED: [Ban Reason], similar to how getting kicked shows up. 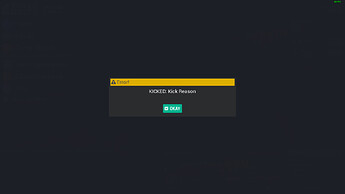 It doesn’t show the reason the user banned you, only shows this screen: 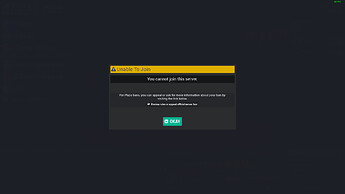 We removed displaying ban reasons because people abused it and put terrible things in the ban reason. Also, new players got confused and thought they were banned from an official server.

If new people got confused before the new message is more likely to cause that confusion I think. especially given the "for plaza bans… " bit. I would suggest replacing that with a message along the lines of “This is a condo specific ban given by the host. It will not affect the plaza or other condos.”

As for the reason being omitted because people misused it to ban people I personally would rather know why, or if they don’t have a good reason and just fill it with expletives and insults then that in itself would be better than no reason at all for me, a senseless ban is far less offputting than one that might actually be reasonable. But that’s probably just me and I can see how other people could think of it differently, a compromise might be to put it in a spoiler so people can look if they want to look at it?

When it comes to terrible things being put in for the ban reason, I feel like that could still happen with kicks. You could kick someone, put a horrible reason, then ban them immediately after. I feel like if that’s a determining factor then kick reasons should be removed too.

As a second thing, would it be possible–when the improved server browser backend is implemented–that condos you are banned from are just hidden from you entirely? That wouldn’t really work so well for when the condo lobby in the plaza is added, but for game world servers it could still be used after that point. Don’t have to explain why they’re banned if they don’t know there’s something they’re banned from, right?

wouldnt it also be possible to add preset ban reasons to pick from rather than letting people write weird stuff into it? just generic reasons like “chat spam”, “harrassing players”, “abusing exploits”, etc