Was playing Mini golf with my wife and friends and some of the moving objects are not in the right places on their screen. They have describe their ball as going through objects or over water or mine or others clipping through objects. It is not like this for everyone however, only some of the people playing. My wife who is beside me has her stuff out of sync, as is one friend while my friend a province over is totally fine. They have varying computer capabilities, computers are both stronger or weaker than mine so I don’t think it is hardware or Network as my wife who is sitting beside me should be the closest and the strongest.

Easiest reproduced when playing with lots of people, I have seen instances where people would hit a ball into a solid wall that was moving because it appeared in a different location on their screen as it was with the host.

We expected the objects to interact and move the same for everyone.

Some people to suffer a huge handicap due to objects not actually being where they see them.

Unfortunately I am not able to get a picture to show this.

The trello for the next update mentions that desync issues in some of the minigolf maps should be fixed soon:

Can you remember which maps exactly you experienced this on? Thank you.

Altitude, Garden, Island and Treasure Cove were the 4 courses we played last night and it happened on all of them so I am assuming it will happen regardless of the map. If they have moving things then they seem to be out of sync. Made it really hard for the second last hole on Treasure Cove as that hole rotates.

We plan to play some more tonight so I can see if I can get some video footage or something of it.

Thank you. I’m currently in the process of fixing the moving platform desynchs, however, the fix has to be done on a map-by-map basis, and it’s a long tedious process. In the recent Upgrades update, the fixes for Sweet Tooth and Kingdom were pushed out, and you should no longer get desynchs on those maps. In the anniversary update coming out later this week, the moving platform desynch fixes will be rolled out for Island, Waterhole, and Forest. Altitude and Treasure Cove will get their fixes in the next hotfix update, and I’ll continue rolling out these fixes update by update.

I apologize for the issue, but rest assured it is in the process of being fixed.

So, Was playing with my friend tonight and there still seems to be an issue with Kingdom. It was really only noticeable in the first bit but there was still some out of sync walls and such. It can be observed in this video. 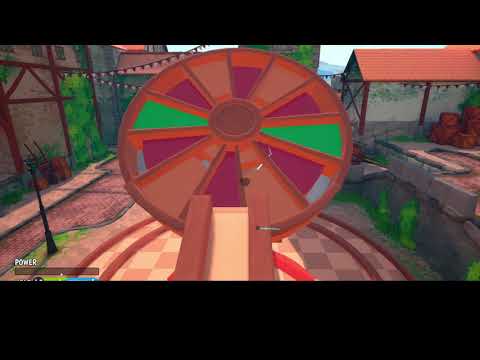 Hi, thanks again for reporting this stuff. I looked at the map, and I realize that I accidentally missed those specific moving platforms. I’ll convert them to the new system and get them out with the next update.