[0.13.0.0] Soundcloud stops when facing another direction

It seems a SoundCloud based song in the nightclub unloads when facing another direction (I assume because the media player unloads?) Sometimes it also does this when I face the media player and it just gives up playing the song. YouTube based songs do not do this. Gets annoying since just randomly the music you were enjoying just stops just for you (Confirmed with people in discord voice chat it only happened to me at the time, so client side issue?)

Edit: It seems obs forgot what I had set up for audio sources, so there is no sound, so basically Im going to have to explain music was playing fine till the player freezes, then there is no audio. Reloading the player causes the song to start at the beginning even through the time is not at the beginning. Gonna see if I can recapture the issue this time with sound and obs not being stupid

Okay, now It just seems random??? I wasn’t able to trigger it while turned around but when FACING the media player.

Streamable 2.0 but With Audio 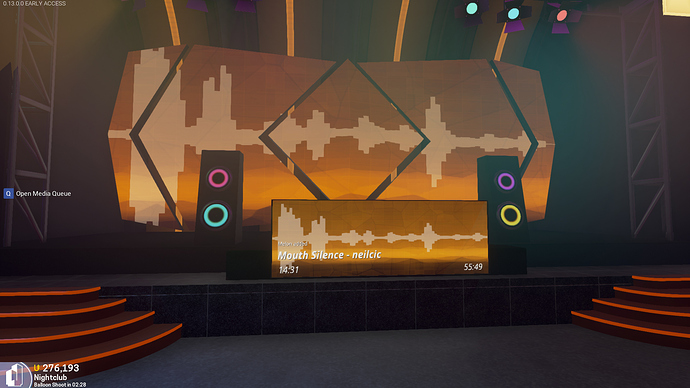 Seems to be working now on US East 4 with this song “Melon” played.
Perhaps its a specific song issue?

And other soundcloud music that others posted.
The song melon played was 50 mins and most songs played were under 10 and audio died half way through songs, It could die halfway through the 50 mins for this song but Im not waiting 30 mins to find out.

Apparently works if not looking at the big screen visualizer (one in the picture above) was able to listen when In the billiards room. Only cuts out after a minute when looking at the screen.

Gonna continue talking about issue in this thread now its confirmed that the OP (@TGCFabian) in that thread is having the exact same issue.