Will optimization get better?

The question remains. How potato, is your PC?

So lazy to check but it’s a potato, like an actual potato.

if the game will be optimized for potato pc’s

Yes. At least according to the patch notes for 0.1.2.1 they are investigating the FPS issues.

We really need your computer specs, though. If you are saying it’s a “potato” then you’re probably always going to have issues running the game. You need to meet the minimum requirements. 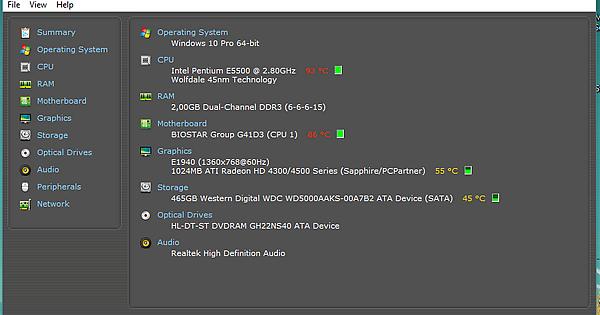 Hardware isn’t a field I have much expertise in but I’d say that a CPU at 93°C is probably not cooled properly. Go dust that computer case and make sure it stays in the range of half of what it currently is.

I tried dusting it off a lot but for some reason it’s staying at like 93°C no matter what. even the room itself is pretty cold to be honest.

Either the CPU is actually running at 93c, which is really bad, or the temp read is broken.

Your main bottleneck is your CPU and ram. Not sure about the graphics card, but it’s from 2008 so an upgrade would be recommended.

I mean, our optimizations could help, but realistically you have really old hardware and we can’t do miracles.

I’d really look into the temperature, though. The CPU would auto shut down if it was actually that hot.

That is a very outdated PC you have there, I would REALLY recommend buying some new parts. 93°C for a CPU is very worrying, you could end up melting that thing down like the reactor in Chernobyl.

Trust me, upgrading my PC is a dream for me at this point, but it’s something i don’t have the luxury to do right now due to the complicated situation i’m currently living at my country, so this is what i have to play with for at least 2 more years…

That’s just how PC gaming is, especially now days it’s very hard to continuously keep up to date with so many new parts being pumped out. You can’t expect to run new games on nearly 10 year old hardware.

You’re completely right about that. It’s just that i have hopes to at least run this game on a playable state until the time comes for me to get a new PC.

Unfortunately it’s not 2006 anymore, and Unreal Engine won’t run as fast as Source on your PC. Hey, might be able to run the game with only 2GB of ram when using linux instead of winblows.

Alright so update regarding the high temp on the CPU/Motherboard, i dusted the whole PC as much as i could but i’m still seeing the same results, the hardrive/graphics card are showing slightly better results, the two fans looks like they’re fine they weren’t that dusty anyway so i have no idea what is going on, i will post a picture of my PC opened up, see if anyone can tell me why the hell it’s overheating like crazy

There’s no need to bump a thread. The devs will look at it some time in the future, 3 months old or not.