Hello everyone, and welcome to the Weekly Dev Log for September 30th, 2019, detailing all the changes that have happened since September 23rd, 2019. Note: Devs that don’t appear in the weekly log are not necessarily away or not doing work, but may be working on things currently not announced or backend work that doesn’t need to be detailed.

@wheezwer continued working on art for the “House of the Zombies” cabinet.

@madmijk continued working on the gameplay code for “Captain Calypso’s Planetary Piano”. He made a system which can play melodies based off of notes, and started writing a program that can convert midis to these notes.

@JJosh continued working on new prizes for the Arcade.

@Will continued working on music for “Ring God”, “Little Birde Feeders”, and “Whack-A-Mole” as well as adding debug queues for working on the general ambience.

@macdguy started finishing up improvements to the scoreboards and UI for Plaza, Game Worlds, and the Condos. Scoreboards have been improved for each game world and now display types of payouts (and eventually more information on each map). In the Plaza, the scoreboard now provides quick links to the appearance editor & collection book, a map of the Plaza with fast travel, Condo server browser, Plaza settings, and news. In Condos, condo settings have been moved from the “C menu” to the scoreboard, as well as a link to Tower Express. The unit counter UI has also been updated and there is a setting to allow players to select various GMT unit counters.

Virus also has new UI in various areas of its gameplay.

You can also now set your condo name while still hosting your condo.

@ThisIsntNath started working on little info-graphic brochures for the scoreboard “About” pages to teach players a bit about the map and the Game World. 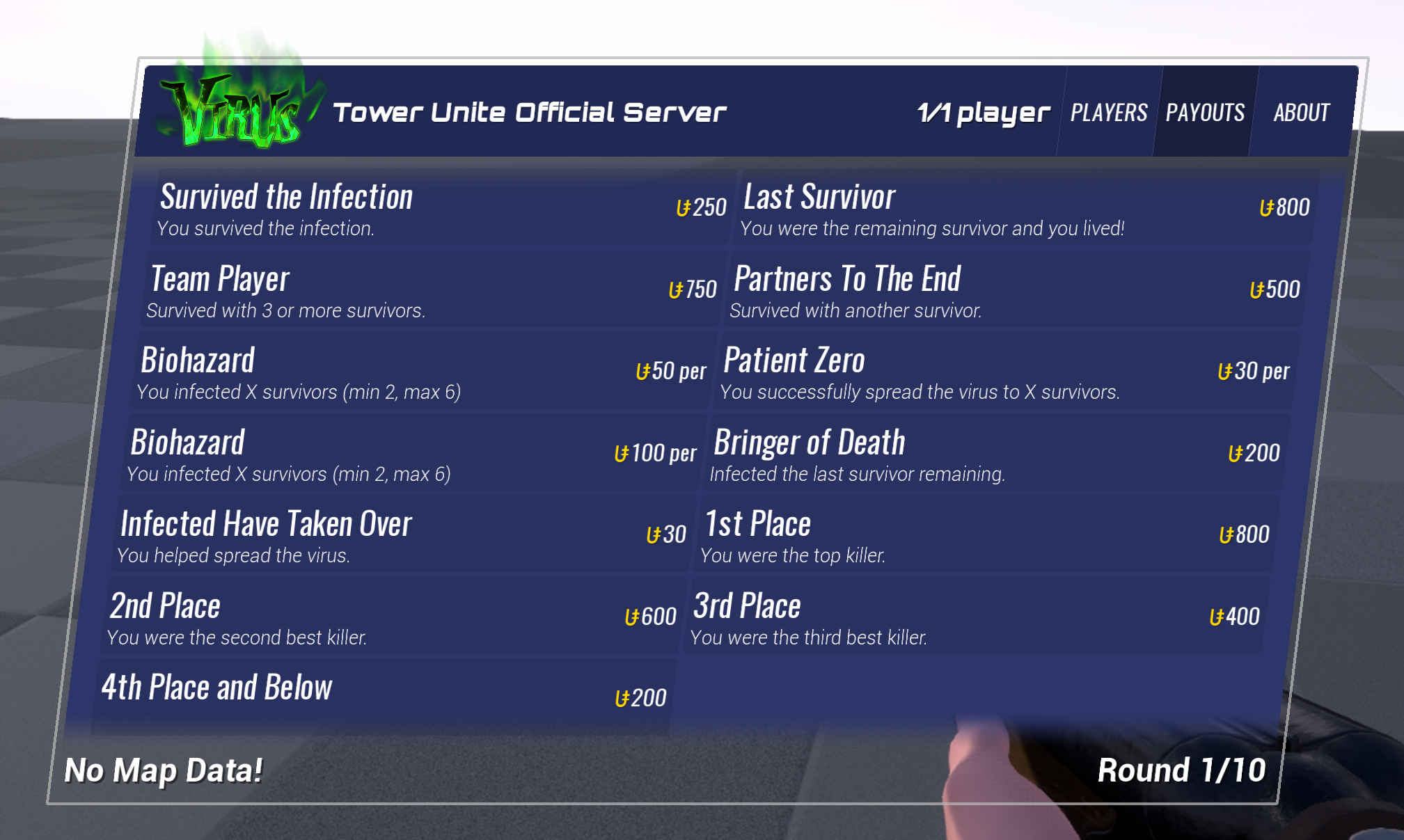 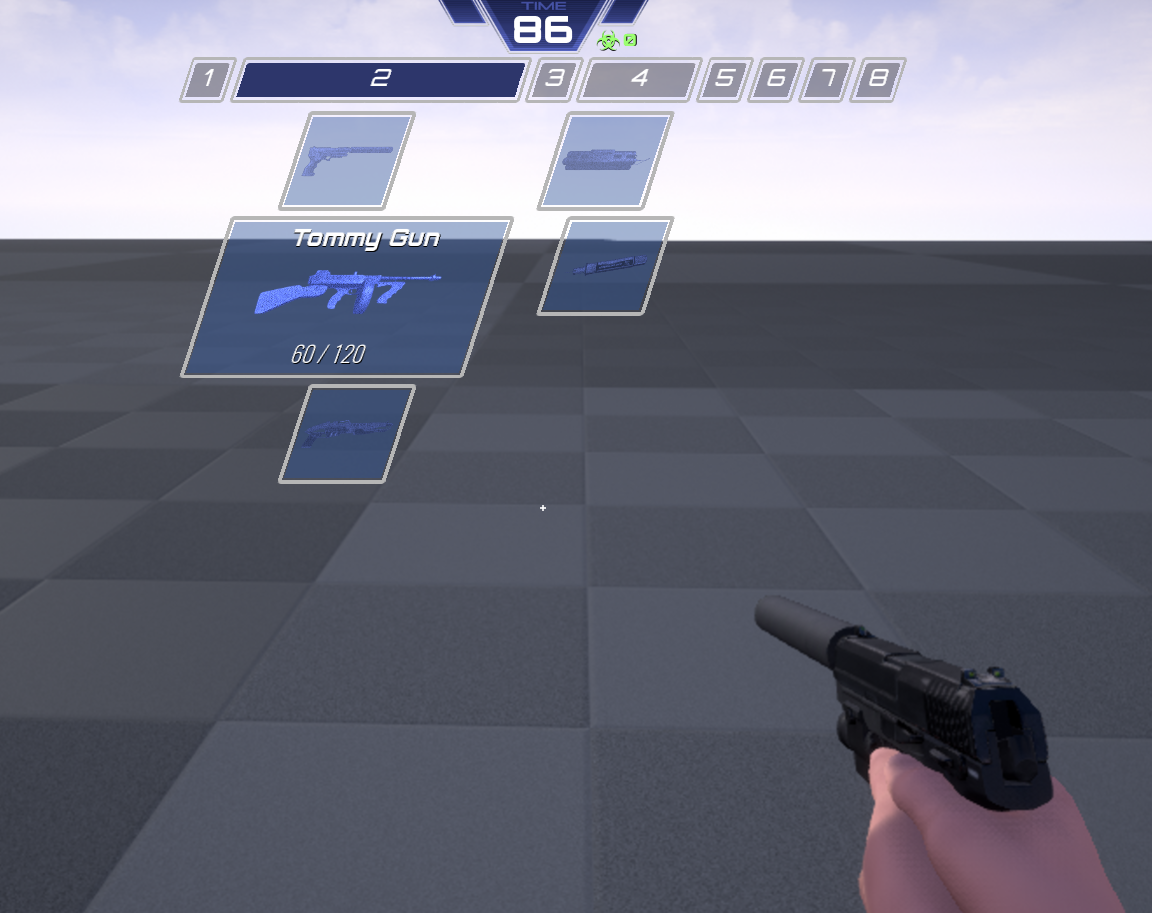 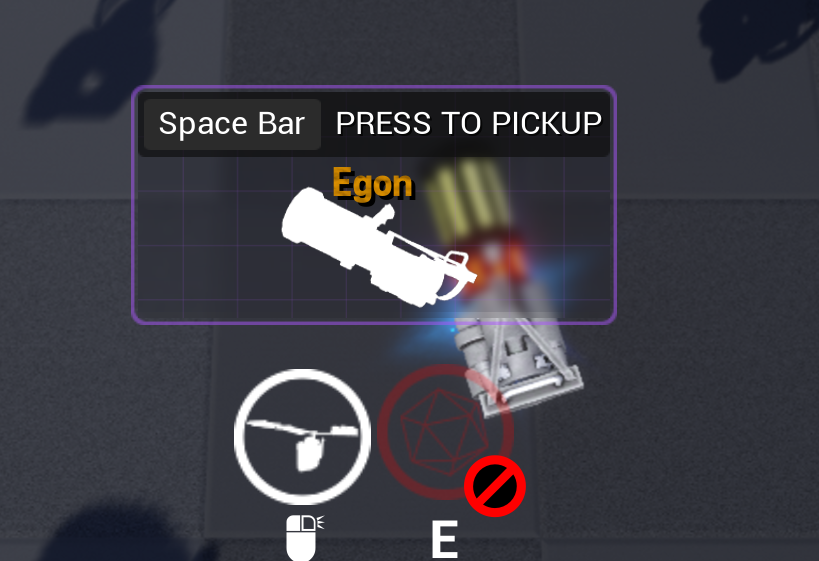 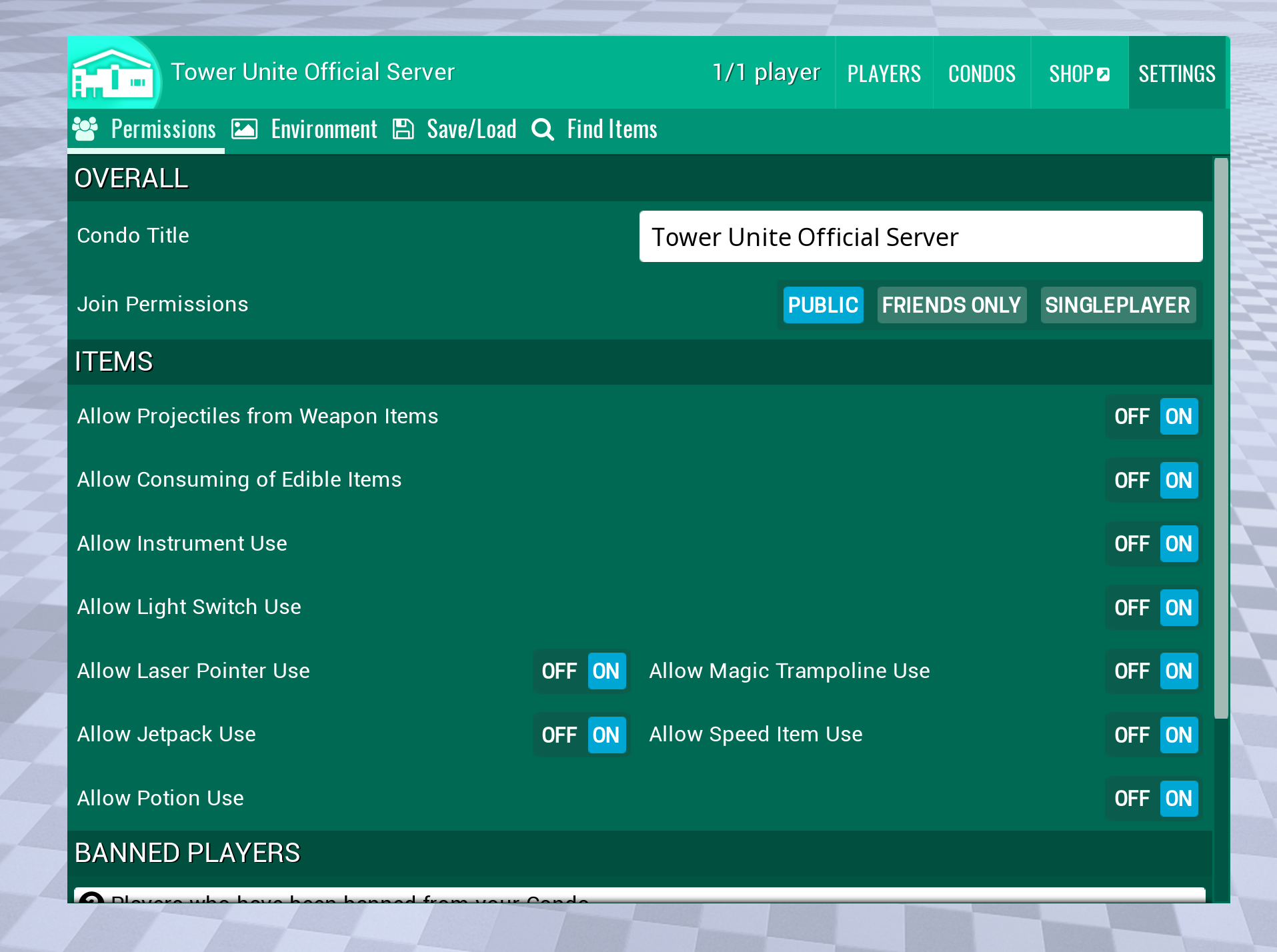 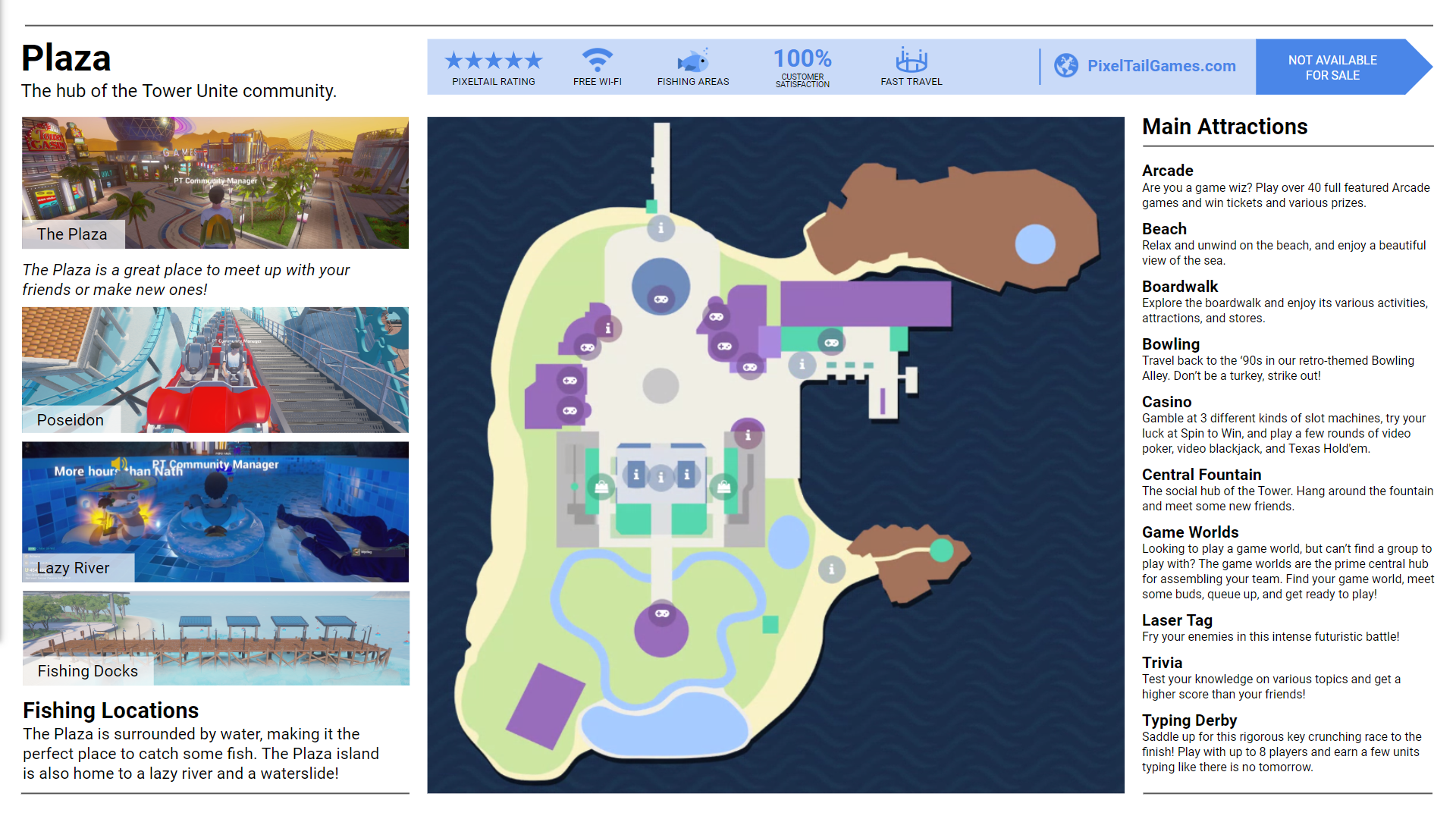 @macdguy worked on a fast travel system for the Plaza, using the new Plaza map in the new scoreboard. Players can now locate all of the activities inside of the Plaza, and click on them to quickly teleport.

That about covers everything that happened since September 23rd, 2019 at PixelTail Games. See you all next week!

Nice work! I’m liking what’s coming. I’ve got a lot to talk about come the next Prizim Podcast episode, lol!

how will the map display players in areas such as Casino? As it’s a different phyiscal area than the exterior?
and will the interior areas have their own sub-maps?

Finally we have free Wi-Fi in the tower, this update is turning out to be a masterpiece.

Looks great! However on the Brochure I think it would be best if there were no text hats. Also, the stores not being mentioned while the fountain is? I dunno
Love the new UI updates!

However on the Brochure I think it would be best if there were no text hats.

The images are just prototypes for now, to show the type of shot we want to be there, hence why it’s labeled WIP.

Somewhat off-topic but since you’re revamping the Virus weapon layout could you also have weapons in each number slot stay consistent between rounds? The fact the placement gets mixed up every round really messes with muscle memory.

God that new Virus hud is making me dizzy, like my eyeballs go 180° inside. I also don’t like the new huuuuuuge popup right at the crosshair for something so unimportant. I’ll turn both off asap.
Plus I don’t think the Minigolf scoreboard need to mention “Scores” lol. The rest looks fine to me.

Edit: I agree with Your_Husbando.

It’s important information, it’s telling you who got infected and that the infected just got started. But the video posted is a bit old, it’s not at the center of the screen anymore, it’s below the crosshair.

Those new scoreboards fit the theme of the gameworlds really nicely. Good stuff.

Plus I don’t think the Minigolf scoreboard need to mention “Scores” lol. The rest looks fine to me.

I think its mostly showing off that it has an animated logo now like virus its just more subtle. 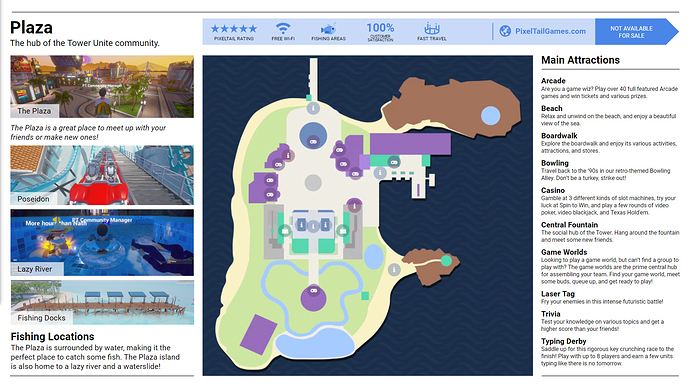 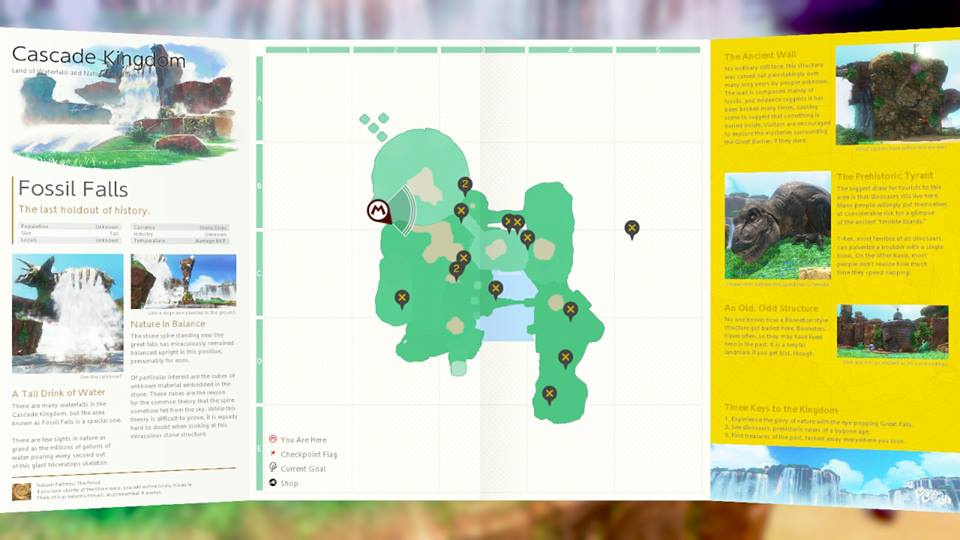 It’s important information, it’s telling you who got infected and that the infected just got started.

No. Either it is me or not me who is first infected & the crosshair shows up when the game starts. The simple text one was fine It didn’t bother or annoy me. I don’t think we need huge popups who just got infected.

I usually just look for the infected player model when the infection occurs because knowing who is infected after their player model has changed isn’t very useful to me, so I have to agree that it’s not very useful (as least from how I’ve played) but I don’t think it’s too big of a deal either because it doesn’t show up for very long.
It letting you know the infection has started is very important, though. Anyways, Mac moved it to a better spot.

Plain text is like oldschool and this game mode plays and looks oldschool. I wouldn’t come up with a new popup like that, you know? And man I hope the Shear won’t stay… the whole scoreboard and the text in the weapon selection hud is so painful to look at. Of course it has to happen as soon I hear the potential good (or worse?) “Virus: Infected slash attack delay has been reduced” gameplay change. My excitement to try this update asap is so gone now.

dont worry bro. i’ll be excited for the update for you instead. very much looking forward to all the scoreboard and overall GUI changes.

I agree only to that fact that everything being rhombus shaped is a bit painful to look at and makes things feel more awkward to read shit (at least when I tried to)
Also maybe the effects and pop ups on screen with the infected at the start shouldn’t be as much as it is since someone like me who haves head pains from sudden bright shit all over the screen will cause an even worse time with virus (not to mention people who are epileptic and such, this may suck for them) I reckon it should at least be a tad smaller

But for the attack delay, that’s a good thing since now it’s easier to punish people getting to close or grouping in big groups like the old infect did
(Although old infect is still better)

I think overall it would be good to have accessibility options. Personally I like the look, but there should always be customization wherever possible for people who prefer different layouts, or are physically uncomfortable with certain aesthetics.