I stumbled across a Wikipedia page of an old arcade machine that was themed after a series I liked as a kid and was only released in Japan (I have never played it). After reading about it I got an idea from how it worked that Tower Unite could possibly mimic.

The arcade machine in question is the game " Rockman EXE Battle Chip Stadium" based on the Battle Network Series and Rockman EXE Anime (or as known here in north america as “MegaMan NT Warrior”. 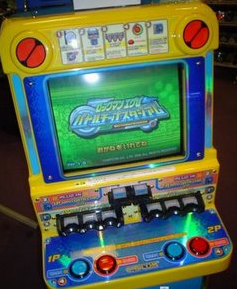 Rockman EXE Battle Chip Stadium is an arcade game in the Mega Man Battle Network sub-series of Mega Man games from Capcom. This game was not released outside Japan. Under the name of “Battle Station”, the arcade game was featured a number of times in episodes of the Rockman EXE Beast+ animeseries.

The game features much of the same gameplay found in the Battle Network series and was updated near monthly with new characters and attacks, as well as updating the hardware. Machines could be linked to allow players to face each other in NetBattles, showing their abilities over NetNavis. NetNavis featured included the so-called “Link Navis” from Rockman EXE 6 , with the inclusion of other, exclusive NetNavis like Colonel, Falzar-Beast Forte and Dark Rockman.

After inserting the play cost of 100 yen, battling was started by slotting up to three merchandise Battle Chips into the machine per turn. Attacking was engaged by pressing a button, with the chips inserted having a chance of being successful, unsuccessful or critical (inflicting extra damage); this was made so to not make the game too easy by using potentially overpowered chips.

The mechanic I was thinking an an idea to incorporate in to Tower Unite (that wouldnt work with the idea of Workshop Arcade Machines) would be this;

Winning a round of the game dispensed a new, randomly picked Battle Chip from stock contained inside the arcade machine. Battle Chips given as prizes changed over time in ‘volumes’ and later versions/revisions of the game; not surprisingly, most of the Battle Chip range was obtainable from the game, including an amount of exclusives. Battle Chips won during play could also have a different colour casing.

The idea is taking this mechanic and incorporating it into a Tower Unite Arcade Machine. While we have the prize counter for prizes that are set in stone by the developers, the idea is this machine as you play would dispense a random item for beating a level instead of a currency (tickets, etc) to exchange at the prize corner. Easier levels would dispense common items, such as something that you could normally get in a shop (TV, Projector, Wood Wall, etc) and as the levels go on and each level getting harder and riskier, the prize rarity goes up. so after dispensing common items, when it gets hard enough, it starts dispensing rarer stuff (Bag of Units, Chest filled with units, Items that you can find with the metal detector when the event is on), and then eventually super rare items (Items that the devs decide that would be “Super Rare”) when the levels get extremely hard.

The actual arcade game to be played would be up to the developers to come up with something, but it would have to get extremely hard so players cant get super rare items easily. Perhaps a bullet hell game with a Catsack shooting and dodging bosses from the game worlds?

Anyways, lemme know your thoughts and feel free to modify the idea or shoot me down. It is just an idea and the purpose of this thread was mostly to see how people would feel about it or give ideas to add on to the idea.

Thank you for you time and see you on the lobby!