Throughout the beginning of May, my goal for Tower Unite was to achieve #1 and to obtain a score of ten million. After 78 hours of grinding, I have finally achieved 10,000,000 score in Trivia as of June 22th.

Afterwards I checked my collection book and all of the sudden I’m #0 and I have a abysmal -1,057,900,737 score! So this lead me to believe that this was a genuine bug, or It purposely wiped away because they thought it was a cheated score. 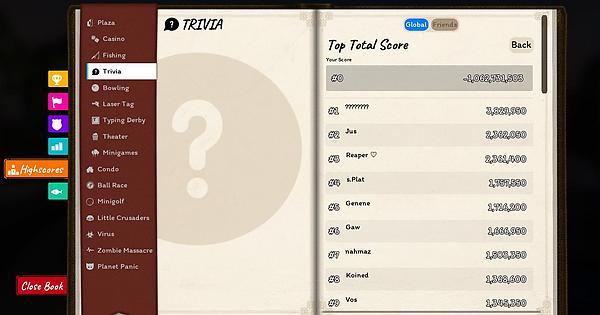 You answered your own question with that last sentence. “Because it was a cheated score.” You cheated and so, they wiped your score. This isn’t a bug.

damn, they dont even give you a chance to get back on the scoreboard (at least any time soon that is)

I’d guess that this is a bug, maybe just a visual bug or something (maybe check back in a few hours to see if it corrects itself). Even if your score was reset for cheating, I don’t know why a signed number would be used for a score. You can’t get negative points, so I’d assume a reset would just put you back to zero.

This is a strange visual quirk with the collection book. Many other leaderboards display ridiculously high or low numbers if you have no logged score.

However, it can be confirmed that your score was wiped: 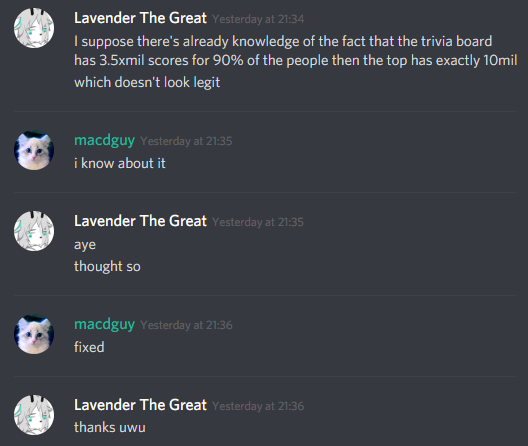 I’m going to give them the benefit of the doubt and say they might’ve worded it wrong and meant “purposely wiped away because they thought it was a cheated score.”

thought something seemed off, i have seen puck slowly going up the leader boards when visiting the plaza on tu (which isn’t that often, which shows they have spent time, or at least i recognise the name from in game, also showing they must be on in the plaza enough for me to notice),
rather than just cheating it quickly like a cheater would do.
Also even if someone did cheat, sure wipe there score, but throwing them into -billion is a bit harsh, probably wasn’t intentional though, if it was, i dont like the idea of that

Hey all, I’m a very close friend of Puck and I’ve known him since 2014. As you might have noticed I am currently #3 on the leaderboard, but that was never our intention. We only started playing trivia to get on the leaderboard and once we both were on there I decided to stop playing for a while, but Puck wanted to continue to grind his score. There was a HUGE gap between the #1 and #2 spot, but Puck was determined to get that #1 spot and took a screenshot on his Steam profile when he achieved it. Once you start playing for a fair amount of hours you’ll notice the same questions come up time and time again and once you’ve memorised them you’ll bag yourself an easy 800-950 points. Repeat this and you’ll easily get 8000+ points every game you play. No word of a lie, Puck actually skipped school some days just so he could further increase his trivia score and his end goal was 10 million which he achieved not too long ago. There is no way that you can ‘cheat’ on trivia to get a score as good as his unless you count memorising questions which is their fault for not having more questions. I just find it stupid how you can remove someone’s hard earned score with NO proof whatsoever that he is cheating.

I’ve been playing trivia with puck for the past month. His score of 10 million is totally legit and needs to be restored.

When you grind trivia it has a snowball effect as you remember all the questions. This lets you get more +950 point answers and advance further and further. I feel bad as I was the one who told him on VC he had had to go for 10 mil points exactly for that cool number.

If you check his playtime, metrics etc you will see with 100% absolute certainty the score is legit.

My score is actually legit, the only reason why my score was perfectly rounded to 10,000,000 score is because originally I was 300 points away from actually achieving 10,000,000 score. If you score the question correct with less than one second remaining, you gain 50 points. So I simply gained points until I got the remaining 300 points to actually get 10,000,000 rounded.

I’ve spent NUMEROUS hours throughout plaza alone playing trivia, I have over 78 hours and 6,000,000 exp on trivia, seeing my hard work just magically disappear is honestly just makes me upset.

The reason why I presumed that it was possibly wiped because I KNOW it happens with people who macro. and so I began contemplating if it was a bug or not. And it seems like it wasn’t, so thanks for moving it in the support section.

But I’m really wondering though, how could you cheat on trivia? There are NUMEROUS of people who assume that i’m “googling” all of the answers. It’s just simply not true and I can really justify it. The main objective I have when i play trivia games is to obtain as much points as possible. you CANNOT earn a lot of points if you take your time and google the questions, it’s really slow and the points are time and accurate based. Wanna know my secret? I simply memorized it, if you play a question based game for numerous amounts of hours… chances are that you will get the answers correct. My average games were 6,000 points per game, therefore it just takes a couple of hours to start getting a million points.

It’s been restored. Sorry about the confusion.

I wonder if it’s possible for the devs to see your collection book, if so then I think they should’ve checked your trivia stats. If not possible for them to do then I’m not sure how they could’ve verified it to be legitimate

It’s not really easy to pull all the data from everywhere, but we’re working on a system to make it easier for us. I’ve got a bunch of Steam API scripts I can run, but they aren’t all that effective because it’s user ran and I missed something this time. I’m hoping to eventually be able to just pull up a webpage and see everything all in one place.

I think Caboose mentioned in Discord that he wants the collection book to be visible on the Tower Unite website once that is worked on more? It would be nice to have everything like that in one place including Tower Express

Yeah he does, but currently he’s constantly improving the moderation backend so we can better manage that as well.

I’d love to have a page that does more than just that though. Be able to grant items, remove items, restore backer items, restore EXP, restore leaderboard scores, etc. Currently Steam just gives us a way to view item exchange history which is nice but the interface is very dated and cumbersome (you also can’t grant items there).