On Friday 24th January at 8PM UK time we’ll be playing some Golf, Ball Race, Virus, and Laser Tag! As usual, streaming is highly encouraged, feel free to plug your stream links below if you’ll be streaming it. We’ll be meeting up on the Poseidon Rollercoaster, I’ll post what Plaza to join in this thread ~30 minutes before the event starts.

I’ll be recording and/or streaming the whole thing as I’m gathering footage for a Tower Unite trailer and screenshots for the Steam page. You can find more info about that here:

Be In Official Tower Unite Screenshots and Videos! General

We’re looking for people to cameo in official Tower Unite screenshots and videos, mainly for a new Trailer that’s in the works and the screenshots on the Steam page. If you want some bragging rights, turn on notifications for this thread and stay tuned for the Plaza we’ll be heading to. Then just come along and follow my instructions, I guess! It’ll be on an EU server on Thursday 23rd January at 8PM onwards, UK time. Some quick deets: I’ll be taking photos and videos of random parts of the g…

Here’s a time zone converter if you need it. See you there! 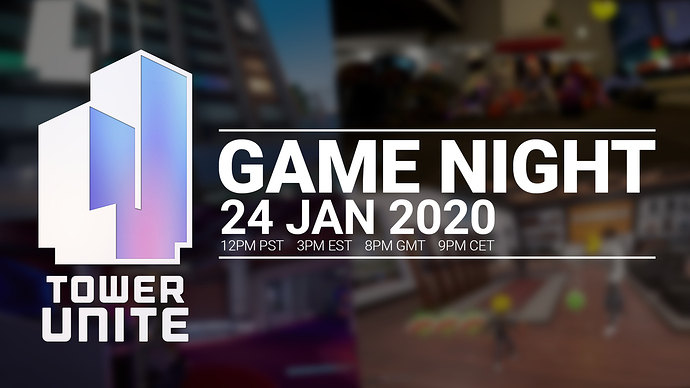 I hope to make it to this one. I’m excited!

Looking forward to seeing you there!

Just put it in my agenda, i’ll see if i have time

Hope I’ll get to join this one as well

Sounds actualy nice, tho im unable be there since i just had surgery and need plenty of rest.

Yo sign me up!
I’m hosting a 7pm show on that day so we can connect!

I got paranoid so I made my own profile pic anyway.

Alllriiightttt, just over half hour to go! So just like yesterday, we’ll be meeting up on EU London 2 at the Poseidon Rollercoaster! We’ll start with Laser Tag and then maybe head into a Game World.

Oh, also keep in mind I’ll have Workshop models off still because I’m taking screenshots and recording footage for the trailer.

Thanks for coming, everyone! Was a lot of fun.

Guaranteed to work 70% of the time, all the time.

This is what the receiving end of 2:30 looked like.

Also, shoutouts to @Alexer_Zoderia and his safety circle.

It’s low quality due to it just being uploaded, after a couple hours the quality gets better. I don’t know why this happens but it does.