I have been meaning to build a computer for a long time now, especially since I’ve become part of the development team. Unreal has been pushing my computer to its limits too often and has limited my workflow greatly. I have run into problems such as overflowing memory usage, bottlenecking my graphics card and overall bad CPU performance.

It was time for change.

The bad, the bad and the very ugly

My old computer was a prebuilt Medion computer that I got for around €350 (~$390) 4 years ago or so. And let me just say that it was good value, with an AMD A7 APU with a PCIe graphics card to crossfire with the processor, 4GB of memory and 1TB of HDD storage. But as time moved on, I started to get interested in some games that were more demanding in terms of computer performance, mainly Grand Theft Auto 5. So, one year ago, I went and got an MSI R9 390 8G Gaming graphics card, a Corsair RM650 power supply to power it all and an Adata SP900 256GB SSD for better game reading speeds. Everything was placed so tightly together that the side panel of the case just could not be put back on, so I left it off ever since. And as expected, occasionally I would hear a rattling sound coming from the computer, after which I had to readjust that pesky SATA cable getting in the way of the fan on the graphics card.

As for GTAV, I immediately ran into horrendous stuttering issues rendering the game unplayable, but I fixed that by putting the pagefile (a.k.a. virtual memory) onto the SSD. The game was playable at around 30fps max. I expanded the memory shortly after this, to 8GB. No noticable change in performance.

It wasn’t until I became a part of the Pixeltail Games development team that I noticed very limited performance from my computer, when frequently running into memory issues. 8GB of RAM wasn’t enough. The processor wasn’t enough. This whole computer just wasn’t enough. So over time, I started looking around for computer components, to use in a brand new computer build. And it wasn’t until recently that I finally had the money to do the build. Now, because I am not that much of a tool, I reused the components that I fitted my previous computer with, except the memory. Can’t use DDR3 anymore. After bringing the Medion computer back to its original state for my parents to use, it was time to assemble Supa Computa. Motherboard, processor and graphics card are in place. Time to wire everything up. All wired up, the memory is in place as well. There’s even room for additional RAM, in case I ever need 64GB or even more for whatever reason. The ultra fast 950 PRO M.2 SSD is also in place, which I had to connect with an M.2 to PCIe adapter. Not like the motherboard didn’t have an M.2 port, it does, it’s just limited to a data rate of 10Gb/s (well, according to the motherboard that is), which the SSD can exceed. Now it’s time for the CPU cooler.
…
Whoops, I didn’t take pictures of that part. I guess I was too excited to turn it on. Well, it sure was a tight fit up there. Luckily the case came with a rack to mount the radiator on, which can be slid out.

Then I turned it on! Excitement!!!
And it turned itself off again after ten seconds. No video signal, though pretty much everything else lit up, except the keyboard.

I then proceeded troubleshooting by calling this computer wiz person I know and tried lots of stuff, like only using one RAM module, disconnecting all SATA drives, etc. But then @Caboose700 did what I should have done: search for problems with this specific motherboard. And, as it turns out, there is a common issue with my type of motherboard where the factory BIOS is non functional. To fix it, the BIOS had to be flashed (updated), which I was going to have to do anyway in order to get the M.2 SSD to work as a boot drive. So I flashed it, and there was light! Note the radiator rack sticking out of the case. Really handy when you need to access the RAM modules. Not so handy if the RAM modules were to be taller.

In the end, I am really happy with the result. Especially the cooler is good-looking. So I went and installed Windows and did some benchmarks, mainly to test the processor and that super ultra fast SSD.

Benchmarks and what not I’m going to do some overclocking later on.

GTAV:
Settings nearly all maxed out, except:
MSAA off
Shadows: AMD CHS
Motion blur off
Advanced settings: all off, except long shadows
This gave me a seemingly constant 62 fps in the benchmarks in 1920×1080. Gameplay is buttersmooth.

Well, I have not actually been able to use that extra screen real estate yet. Why? Because the screen had a defect right out of the box. I’m going to send it back to either have it repaired or, preferably, get a new one right away. I didn’t fucking pay for a broken display.

Anyways, I hope it was a good read. I am sure enjoying my computer! Next step is to add some LED strips in there, because it’s hard to see anything in there on pictures with the fully acrylic side panel on.

A PC is not complete without fancy lights flashing within it!

Awesome build! Sad to hear that the display wasn’t working though

Nice build apart from your GPU is very under powered compared to the rest of your PC parts. An old GTX 780 is more powerful.

Doesn’t an R9 390 have similar raw performance as the GeForce GTX 970, which is currently a bit faster than a GTX 780 because Kepler based GPUs haven’t aged well? 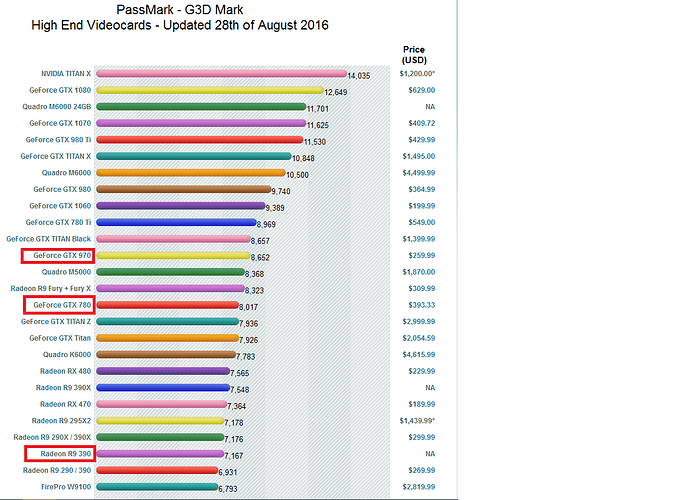 it was time to assemble Supa Computa.

You’re really using Passmark as a way to determine the raw performance of various Graphics Cards in real world applications? Synthetic benchmarks, let alone Passmark, are not necessarily indicators of real world performance in games. If you want a better indicator of the R9 390’s performance, especially when compared to the GTX 970 and GTX 780, then I’d recommend you take a look at this review of the R9 390 from TechPowerUp. It’s a little over a year old, but it is still relevant to the subject at hand.

PowerColor introduces a new triple-fan, triple-slot, full-metal cooler with their R9 390 PCS+. The card comes overclocked out of the box, and PowerColor is asking a small $10 premium over reference-design pricing. Like all R9 390 cards, it features 8...

The reason why I got an R9 390 over a GTX 970 was because it was both better in performance and a better value at the time when I got it. It was sort of the best bang for the buck card. This video here helped me make the decision.

JayzTwoCents, one of the many PC Hardware reviewers that I watch on a semi-regular basis. Honestly though, I’ve been watching a lot of the tech YouTube channels recently as I’m thinking about upgrading my graphics card, from a GTX 970 to a GTX 1070 or GTX 1080 so I can make full use of my 3440x1440 60Hz display for my games. I’m just not sure which one to get though or even to upgrade at all, but I’m currently leaning towards the GTX 1070.

I bought a GTX 970 in August 2015. Here are some arguments from that time that formed my decisions. When I bought the 970 I didn’t really think about the R9 390 pros too much…

Reasons why I should have bought the R9 390:

Well, after a whole month of waiting for customer service to do their job and send me a new display, I finally got to use that screen real estate. I instantly went and reset the Windows screen scaling from 150% back to 100%. I don’t care about seeing the same windows in a slightly sharper form. Instead, I am going to use the extra screen space. I also went and put my old 1920×1080 display in portrait mode for Discord. Although it’s currently leaning on some pipes on the wall, I am going to purchase a proper mount for it as I was pleasantly surprised to find VESA screw holes in the back.

Display aside, I finally put those LED strips in the case as well. I got some molex connectors and soldered LED strips to them. I actually had to place strips of paper over them so the light wouldn’t put the other lights in the case to shame!

Dang, is that a Logitech G303 I am seeing there?
It’s a solid mouse, I had the G302 before, and it served me well, until some buttons stopped working properly.

Huh? Doesn’t the G302 have light blue lighting? The lighting is dark blue in the screenshot and the G302 cannot change the lighting color, so I thought it’s the G303, which has RGB lighting.
Maybe it’s an illusion because you have breathing enabled for the lights, and you took the screenshot when it was at specific brightness which makes it look dark blue.