I don’t really know where else to put this, but a considerable number of servers are gone from the list, and it happened just recently. 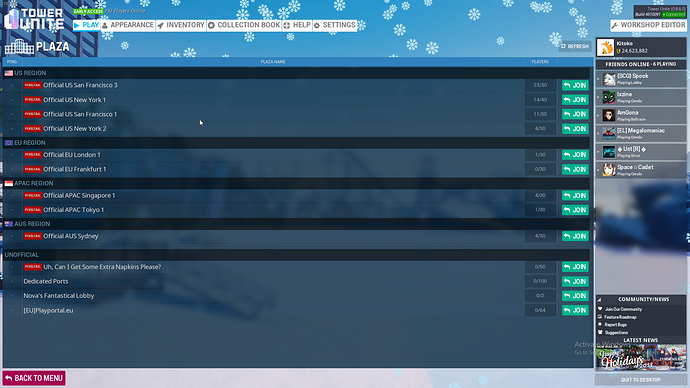 Is there some sort of maintenance going on, or are they down for good?

Servers fluctuate to keep players playing in the same Plazas. That way people don’t see servers that are just 1/30 players and instead join 14/30 players.

At the same time, when we’re left with this new server host producing large pings on servers like New York, San Fran and others (seriously, take a look at the pings on New York 1) this isn’t going to solve any problems, it’s only creating more and isolating some players who like to play on servers with less active players. This decision isolates people who want smaller lobbies to go to Asian, Oceanic or European servers – if the servers are being paid for, that choice should be up to the players, no?

Nothing good ever comes out of forcing players doing non malicious things away from what they’ve done traditionally for months, if possibly years.

I love PixelTail and have supported them and will continue to since before Tower Unite was even announced, being one of the Lobby 1 Gmod Tower players, but this decision makes no sense IMO.

Well, there’s more servers than what the picture shows, they get added dynamically. We’re reworking our systems to make it so you have the option to quick join the most populated (but empty slot) Plaza.