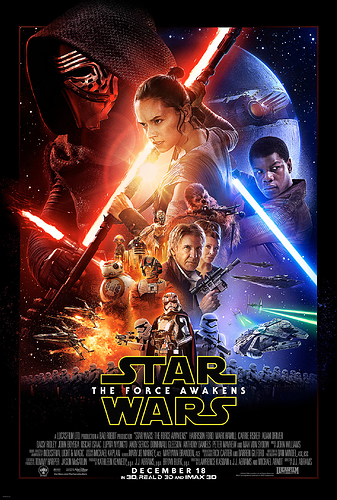 The force has awoken.

Who witnessed its awakening? What did you think? Do you feel more or less confident about future films?

I actually went to a Star Wars marathon where episode 1 started at like 1 AM the 17th and we watched all 6 episodes and then The Force Awakens when it came out at 7.

I loved the movie and tbh it’s probably my new favorite star wars.

Man, I wish I had been able to go to one of those marathons.

I’ll be honest, I love the old movies but I don’t think they’re that awesome, possibly because I didn’t seem them when they first came out. I’ve always been a huge EU buff, primarily through the games and books. Experiencing TFA in the theater is probably the best way to experience all the Star Wars movies, and it probably is my favorite movie too.

I gotta say that I thought it was pretty good. I saw it at the Drivein, which is really nice because you have your own surround system and don’t have to hear any winy kids. I thought it was a really good movie, and did better than the Prequels.

Honestly, my only complaint is SPOILER SERIOUSLY I FUCKING WARNED YOU ASSHOLE ITS YOUR OWN DAMN FAULT AT THIS POINT IF YOU CLICK IT:

I personally feel Han’s Death at the hands of his son was pretty cheesy, and I saw it coming a mile away. I felt it was a cheap way of killing him off, and feel he deserved a better death.

I loved the fucking BB-8 thing though.

I had a pretty satisfactory time at my theater’s showing of it, though your atmosphere seemed pretty sweet as well.

As for my thoughts on the spoiler, [spoiler]I had known from the get that Han Solo was going to die thanks to some pond scum on the Internet. I didn’t know, however, that Kylo Ren was going to kill him. Came as a shock to me because, for a moment, I thought he’d be redeemed (because what’s Star Wars without a sappy redemption story?) The music was also well done because it shifted abruptly from the soothing theme to one of tension, and then down goes Han.

What really bothers me about it is the fact that the three were brought back and we’re losing Han in the first new film. I don’t understand having Leia and Chewbacca especially without Han. I don’t think Han’s death was necessary at all, but I’m willing to bet it’s because Harrison’s too old and he doesn’t want to act anymore.[/spoiler]

As for BB-8, hell yeah. Very welcome replacement for R2-D2, and he was cute as hell. Finn and Rey overall as the new main characters were great. I’m confident about the future of the films.

@Drachen hey how u do dat were u do da blurry text cuz i wana do dat but i duno how cuz i am stoopid woopsy daisy i jus bumped a 2 moth old thred uhh think of a lie uhh… HEY I THINK THAT MOVIE WAS GOOD BUT YA KNOW ITS NOT AS GOOD AS THE FIRST FEW FILMS AND STUFF YA KNOW. ALSO THE SPECIAL EFFECTS ARE NOT THE BEST I’VE SEEN BUT YA KNOW THEY TRIED.