Only getting paid 25 per hole minigolf

i am only getting paid 25 per hole, no matter the score.
attached screen shot of hole in one.
friends signed in and played, getting paid as before. i restarted steam, and game, still no change. 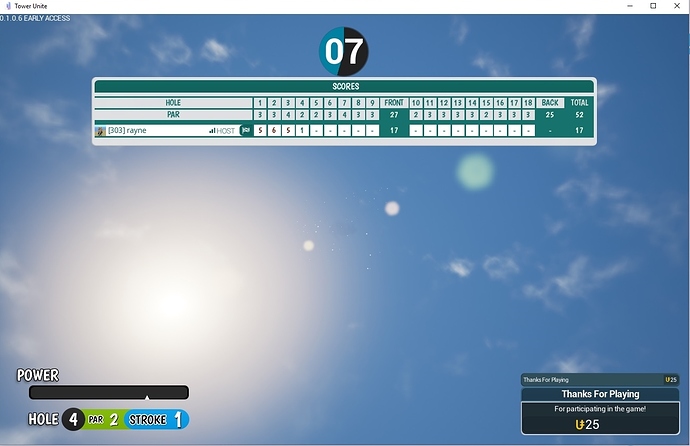 For people playing on their own, payouts have been limited to prevent farming.
Just play with more people.

i got tired of getting griefed, so i started making “friends only” games. i don’t feel like this is fair of you to do.

You mean like verbal abuse? You can mute those people.

people were coming into my games and then not taking their turns, so i would have to sit there forever.
people who “cheat” are going to find a way to do it, no matter what.

please don’t punish those of us who want to have fun and enjoy the game because of them.

there are a lot of immature people in this game, i constantly have to mute people or boot them from my condo.

i deal with it because that is life. but if i am going to not be able to enjoy the game, and earn money legitimately, thats not fair.

As far as I know, being AFK prevents you from getting even the 25 Units participation prize.
But they do slow the game by a lot. They’re implementing an AFK ignoring system though.

At the moment your best bet is to play with a group of friends. Though if none of your friends have the game or aren’t playing, you’ll have to grit you teeth and bear with randoms.

In my opinion, preventing farming should not already be done in this current state of the game. There is no way to know yet whether a game is already going and how far it progressed when viewing gameworld servers. And servers might be a tad unstable, although most server issues were fixed in previous updates. Joining from a lobby never worked for me yet (although I admit I only tried that once or twice

), that was the key thing for playing with a group of people though.

most of my steam friends have this game, but we aren’t on at the same time a lot.

so, i am going to be prevented from legitimately earning money because of cheaters.

how many games would you play where you have to constantly sit and wait for others to time out so you can play?

do not worry, mac will correct the error in the next update, he said he disabled payments accident.

thank you VERY much !!!
from those of us who don’t cheat.