More info about progress of minigames

So , not long ago i was playing TU and i wanted to play a new game of minigolf , but i just didin’t want to wait for the plaza to load , so i went to the ongoing servers of minigolf and i joined a server with 1/16 people , so i thought that the guy is waiting for people to join , so he can start , when i joined i saw that the game is the last hole , so i left .
And then i was wondering if you could add what i will ask for in a sec. The thing i am hopeing you’ll add is more info about ongoing minigame servers when you click on the tab , like : when the game is in the lobby state (the whole “ready up” state) it would show something like “State: Starting” and when the game is in progress the state will be “State: In Progress” (when the game would be in progress then there would show up some more info like “Hole: 0/18”
Here is a concept screenshot: 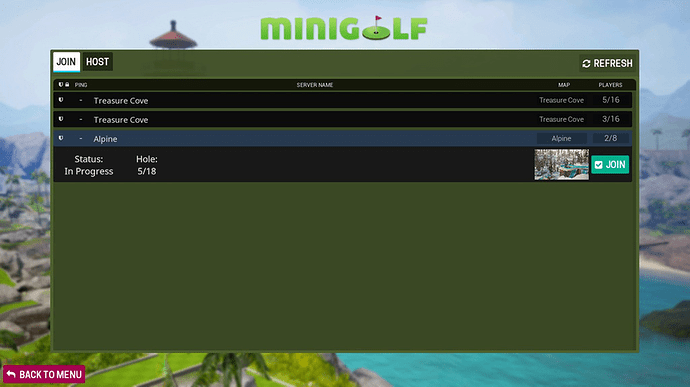 I hope this gets accepted.

Please use the search function before posting

This is a planned feature.

They confirmed that they were looking into it during Friday’s stream. Don’t know how long it’ll be till it’s implemented given it’s probably low priority, but yeah.

I’m just bringing the idea back alive , that post was made a year ago , so i made a refresher.

Bit late of a response there, bud