[0.16.3.1] Winter Plaza - recessed area of the ground at the fountain has ice physics despite not being ice 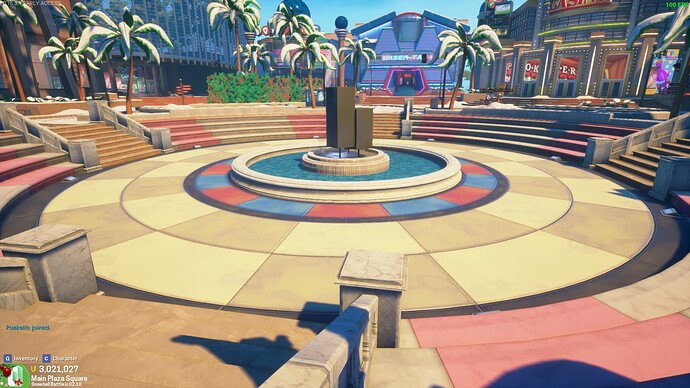 [0.16.3.1] Hitbox for the UFO on top of the arcade is much lower than the actual model. Collision for the column supporting it is fine, though. 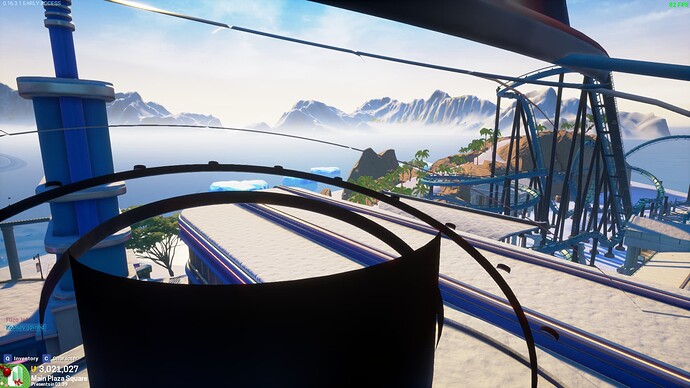 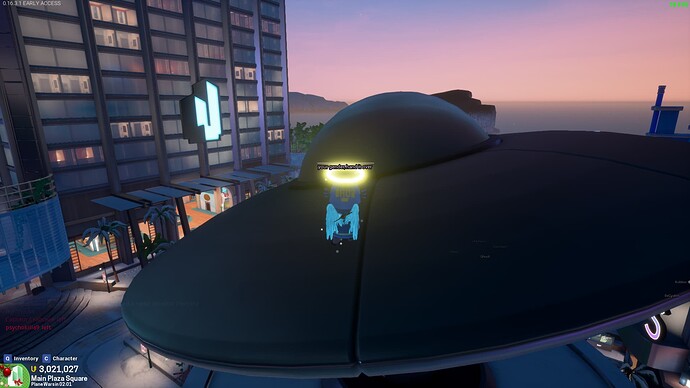 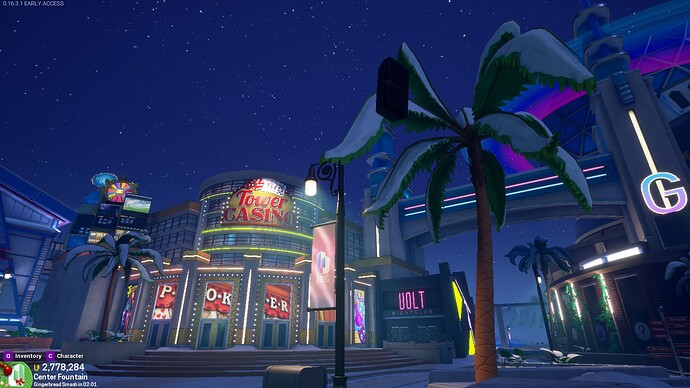 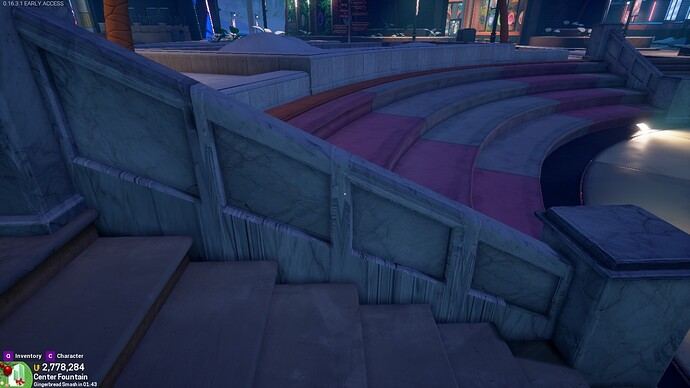 East store plants are missing: (west stores do have them) 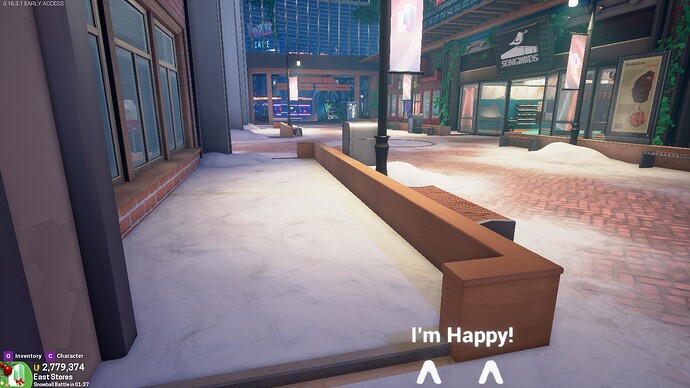 On the beach next to the pool it looks like you walk in water: 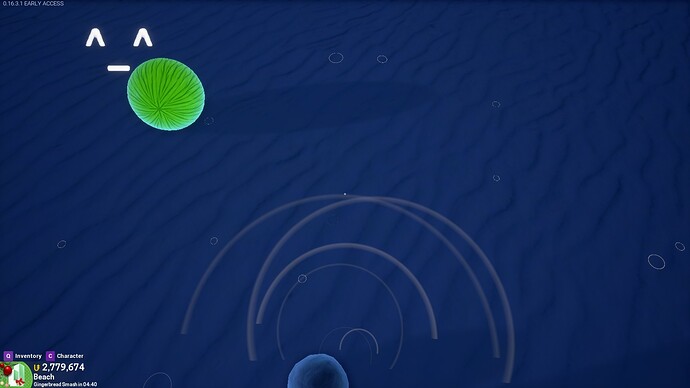 Toy Stop and Songbirds have their images flipped. So the colors of the interconnecting plastic blocks and the sign behind the counter have their colors swapped around, and for Songbirds you can see the drumkit and the piano swap places. 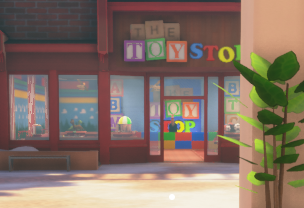 Vroomspeed seems to be using the Central Circuit interior.

And then D.I.Y. seems to be using the old version of Sweet Suite for its interior, 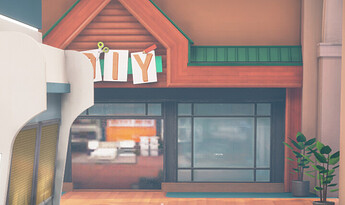 and it looks like Sweet Suite is also using that older version, although it’s very hard to see it normally.

During winter the one for Seasons is pretty noticeable as well, lacking the ice in the water. 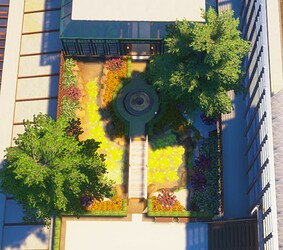 I get if you’re on the ground that it’s hard to see at this distance, but flying to the lighthouse from above it is very green from a not-too-far-away distance. 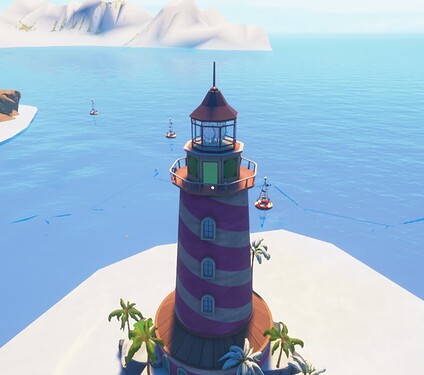 If you set your shadow quality to low and fly upwards you will see the shadow of the entire plaza appearing way below the physical map, the parts of the shadow you see appear to be based on what the game is currently trying to render, the higher up you go the more it will show as long as you are looking vaguely in the direction where what it has to render is.
It also makes two smaller copies of the same shadows to the left of the main one 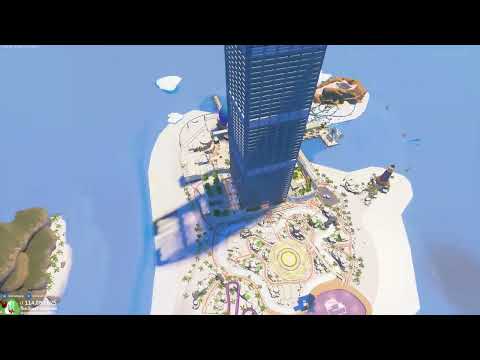 Not sure if this is already fixed in the updates that are coming in the Holiday update, but King Arthritis’ hat seems to be where he was before the redesign of Celebrations. 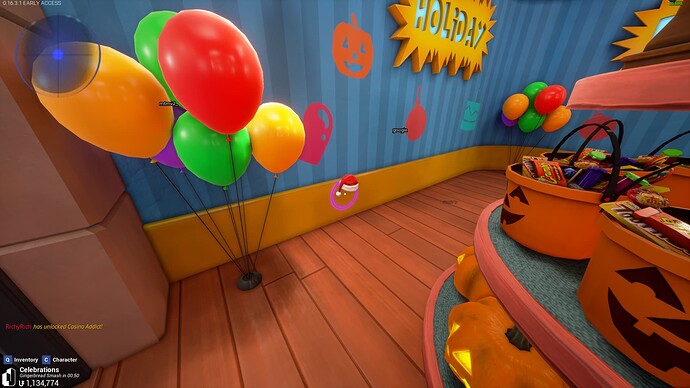 I also don’t know if this Laser Tag entrance LOD has been reported or is fixed–but when far away the glowy bit around the door is on the pentagonal sorta thing and when you’re close it’s on the more squared looking one. 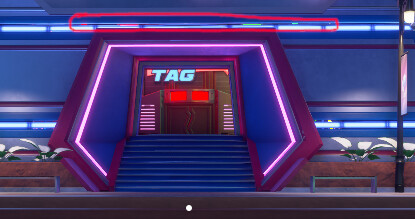 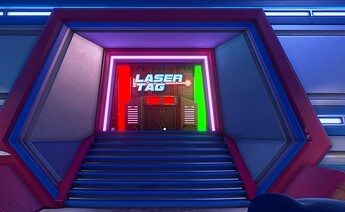 There’s also a gap you can see through (circled in first picture above), which is more visible from far away due to how large it is with the LOD and the angle you’re at.

Also I don’t have fog on so no screenshot of it- but the new volumetric fog makes it very apparent that the lights in the pool are floating above it, which may not matter since that area still needs to get redesigned in the future so I’m sure that’ll be dealt with eventually.

Also some more stuff with D.I.Y. similar to the post a week ago–

Being at a certain position near the backer statues causes the store and sign to unload, including the fake interior, allowing you to see all the way through to the subway. 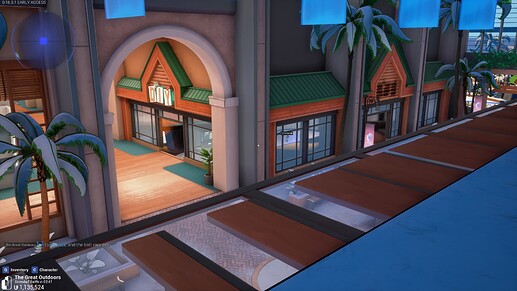 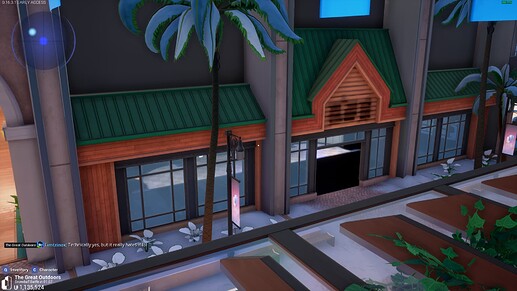 Walking into the Christmas lobby you quickly notice that the hidden fox plushy is kind of floating in the air.
It doesn’t even have something to hold on to. 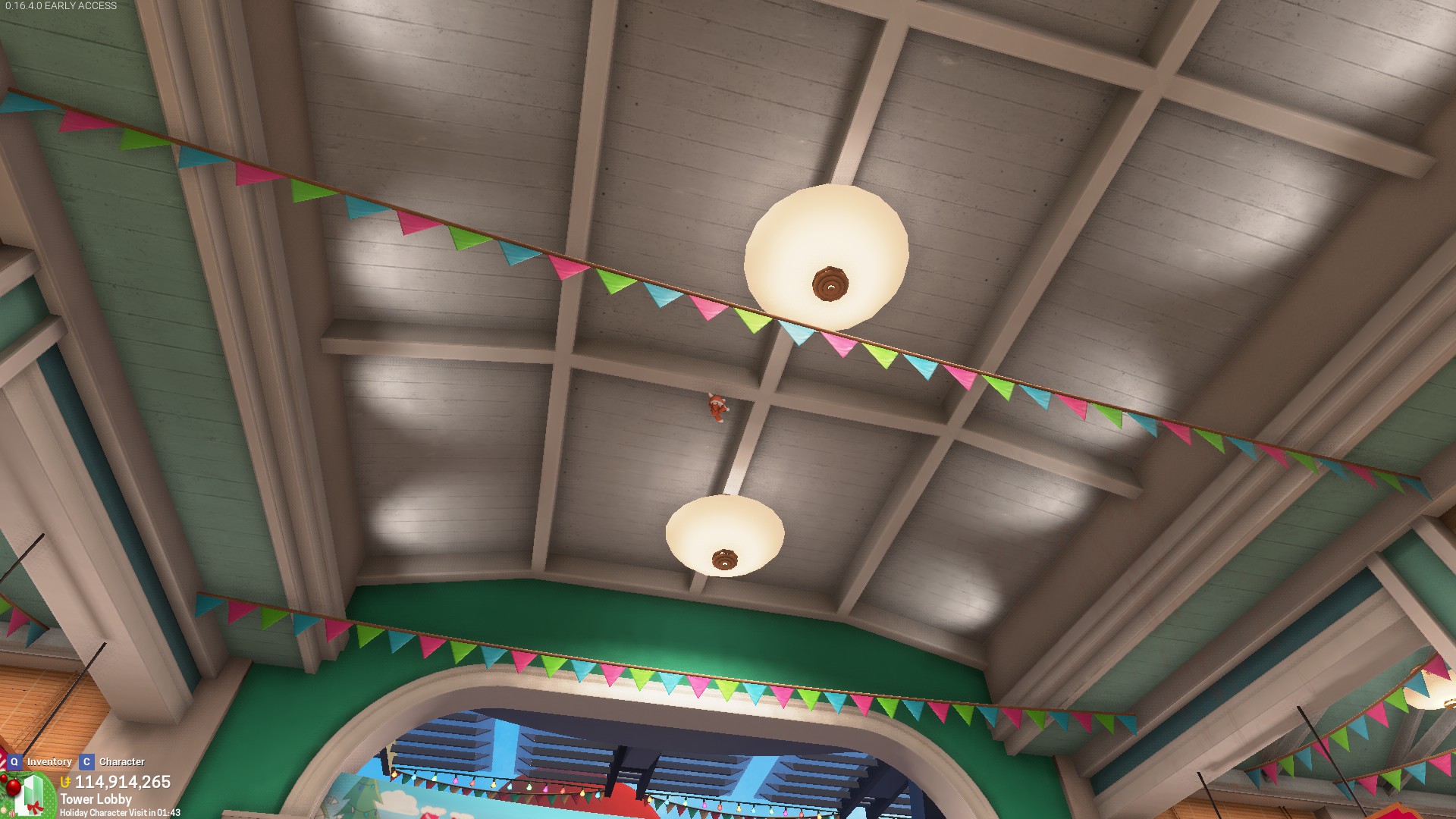 These archways aren’t symmetrical–on the opposite side of the Tower they’re further out so they fully hide the lights going through them, but on this side (west stores) the lights are clipping through the wall halfway. 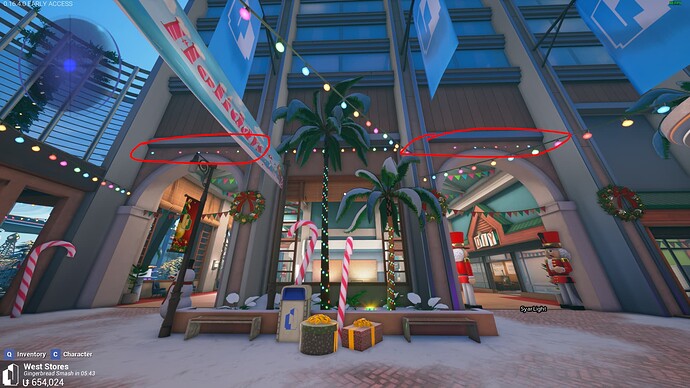 I did make a bug report on the invisible water splash at the beach as well, but no one has ever fix this one yet. 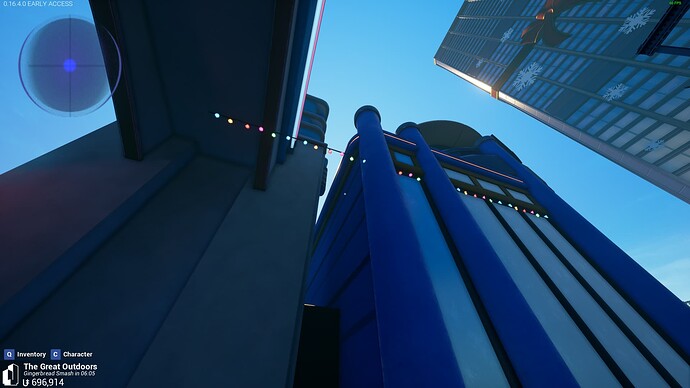 Also- the snowman light has some z-fighting, didn’t notice this on any of the other standing light displays 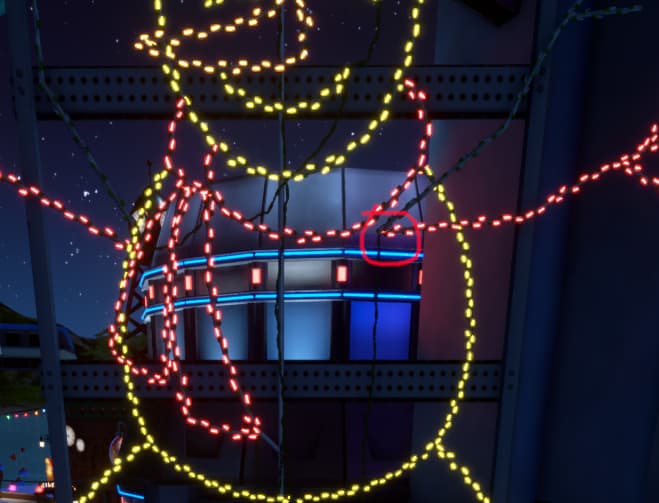 idk how easy is it to tell from a still screenshot, but the lightrays caused by the volumetric fog seem to not be getting blocked by the windows of the Tower 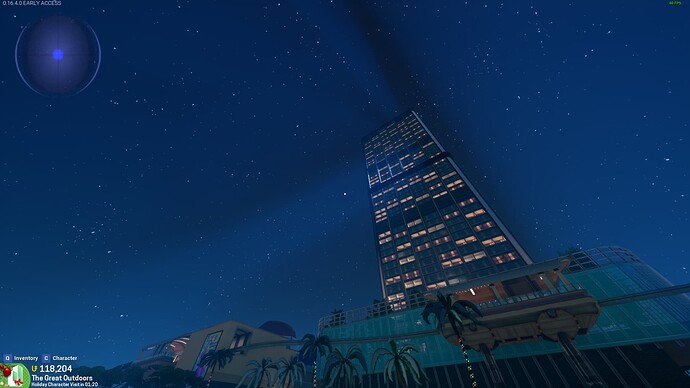 In Sweet Suite Furnishings, these chairs cannot be sat in: 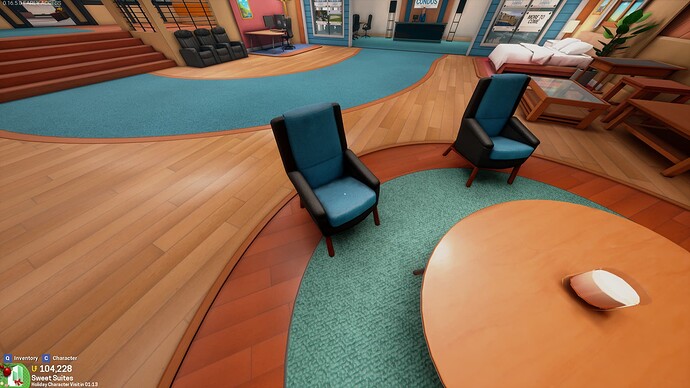 But there is a seat behind the TV: 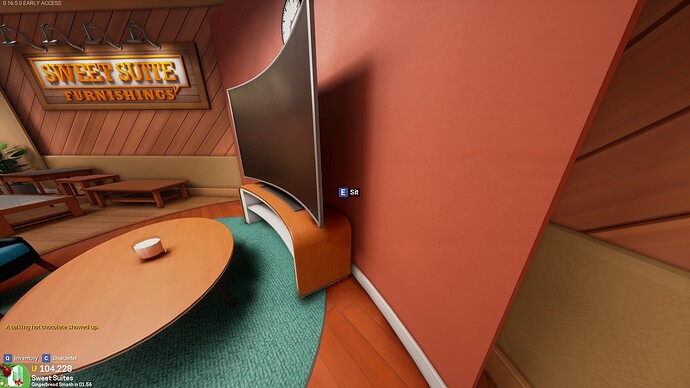 and also behind the backing wall: 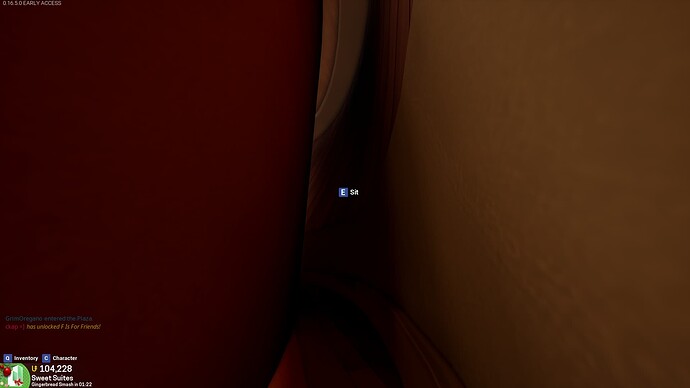 I can only assume that they’re something like a hidden seat and they are placed incorrectly.