So as someone who loves having more and more interactivity and intricate things coming to condos.
I’d like to suggest some things I’d personally like to see as additions/improvements for NPCs.

So the current way to modify text is alright, simple. But we could probably do better.
Currently we have

Strange that the only one surrounded is %name%, what I suggest is all future/current text modifiers be surrounded in % % to allow use wherever in text. Some like the shakey text could simply have:
%!% = Start
%!/% = End
To determine what text should have said effect. An example of this would be:
" This is %!%example text,%!/% isn’t it cool? "

Simple few suggestions I’d like to see are the following…

Bold.png1148×150 7.64 KB
The text’s color could be determined by being able to choose the color theme of the character’s UI.
Which is a separate suggestion on its own, like so:

Being able to change the location of the camera mid-text.
Can be used at the start of text so separate text can have different views or mid-text to change the perspective for more artsy shots or to reveal something. Just an example:
" %CC;X-116;Y1125;Z800;% "

If no CC modifier is used or if it isn’t input correctly, the default camera coordinates at the right of the editor is used instead. My only issue is, would this be able to work client-side to prevent multiple players from changing the animations as they talk for other players?

Similar to Camera Coordinates, this instead would allow you to change the current animation of the character mid-text or the start of new text. Again, would this even work for clients-only? Who knows.
Here’s an example:
" %AC;Relaxed% Ugh, I’m so tired…Need to lay down.%AC;Lay Back% Much better! "

If there is no AC modifier, it’ll choose the default animation chosen on the left of the editor.
Upon leaving the dialogue, the animation will return to default.

Button Prompt Text Edit
Ability to edit the button prompt text.
This is quite an odd suggestion honestly, but it’s due to NPCs being used for far more than just their playermodel, they’re used for their ability to position the camera, allowing for unique positions that can add immersion or assist in providing context. 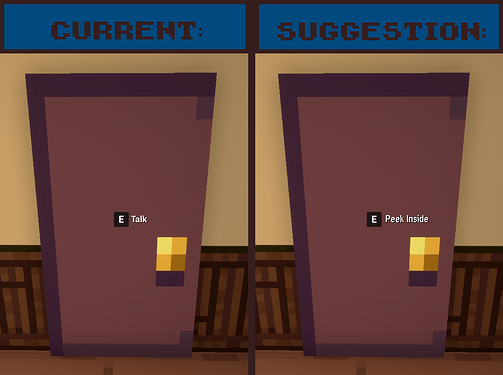 EditPrompt.png1074×800 346 KB
This would allow for a bit more creativity to the use of NPCs in general

On a more personal note, as you can probably tell I love the addition of NPCs~
Adding more immersion, interactivity and more things to see and do for condos is something I love to see.

Personally I’d like to hear what you guys would like out of NPCs too, so feel free to leave’em here~
Thanks for reading this butt-load of text.

You know the halloween skeleton npc? King Arthritis? He makes xylophone sounds when he talks. It’d be nice if there was an option for talking sound effects. Both the ones built-in game and custom ones once cusotm sounds become a thing.

Same here, but I think that comes down to how many lines the person who made the NPC gave for the NPC. It would be nice if it wouldn’t say the same thing even if there’s other lines of text though. I can totally relate.

I kinda made a topic on this as well. But mine is more design based rather than text based. Still, looks good!

This would be great!
I’d love to also see %rand_player%, which would put the name of a random player in your condo there. ex. Don’t you think %rand_player% smells a bit funny?

Also something to generate random numbers, something like %rand_int%%20, generates a num 0-20.

I know this is an old topic but I wanna ask, have the features suggested there been already introduced to the game? I never tried doing any of the mentioned stuff. Also my own suggestion (just posting it here, not sure if it’s worth creating it’s own topic) - Give NPCs owned accessories, weapons, etc.

No none of them have been added to the game, however it’s not really a priority so I can’t imagine it anytime soon.