Golf: Ball in hole, but not acting as such

Out The few times I’ve played golf, I’ve had this issue with golf where the ball will be in the hole, but the game will act like I still have to hit it. It has only done this twice. 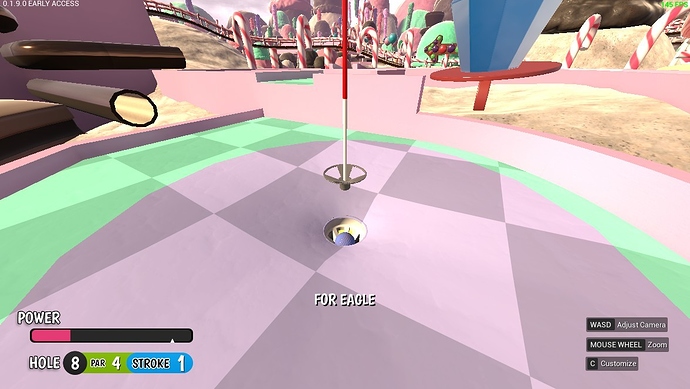 I’ve had it happen on the candy map and another one (forgot which) But it’s usually when the ball stops JUST short of a slope, slides down very slowly, while sliding down, it will keep the “swinging” interface up like the game doesn’t detect the movement. When I hit the ball it teleports just short of the hole and falls in. I took 2 screenshots of this one, and kinda forgot the first time it happened.

A little more context for the screenshot… I got the hole in one shot on hole 8 when it ejected out it left with such little force for some reason… So it stopped on the edge of the hole, opened the swing interface. and the slope pulled it in. Instead of giving me my Hole in one, it kept the swing interface open like nothing happened. I was playing with friends and I believe they say they saw my ball in the hole so it doesn’t seem client-side. But my memory could be failing me. This happened on the 16th of January and I double checked the changelog (from the 18th) and didn’t seem like it was fixed. Kinda forgot to fill out the bug report until today.

This is a known issue.

This is known. This happens when your ball stops, then goes again and gets in hole. Which is another issue.

This is the result of a client/server desync. Your computer thinks your ball just barely got in the hole, but the server (which has the final say) thinks you stopped. That’s why you “teleport,” really the ball is just correcting itself to where the server said it was. Regardless, it is an issue that needs to be fixed.