Decided it’s about time to share what I’ve done with my condo as of now. Some spots from the condo take inspiration from other threads, because goddamn some of these people have some sick condos. 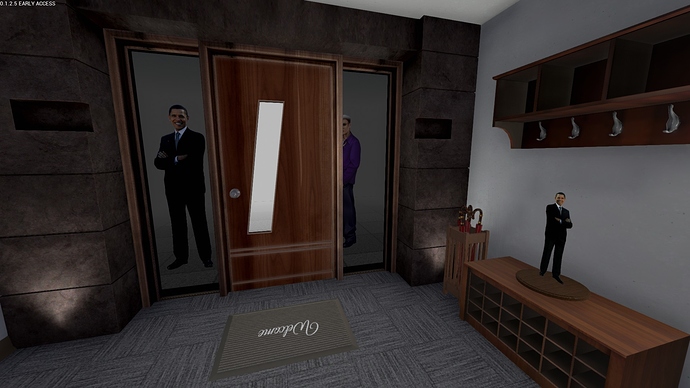 First we have the entrance, nothing too special aside from the old cardboard cutout image of President Obama, I went for something simple since people don’t tend to spend most of their time looking at the door. 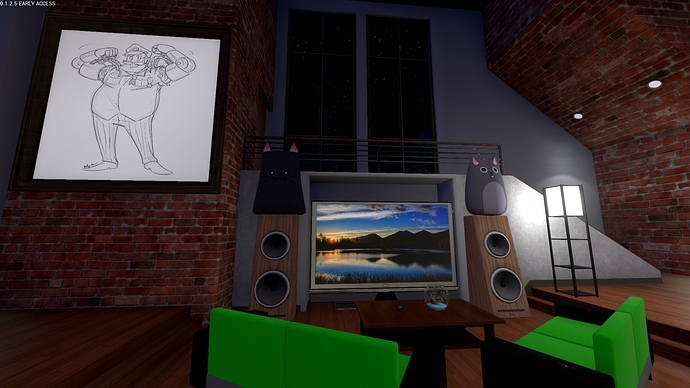 Next we have the general living room look I’m sure most of us have had at some point, the couches and a table facing the TV in the slot it was made for. I did decide however to do what I did back in Lobby 2 and put some cat sacks on top of the speakers. To the left is a picture I commissioned a while back, and had decided to put on the wall. 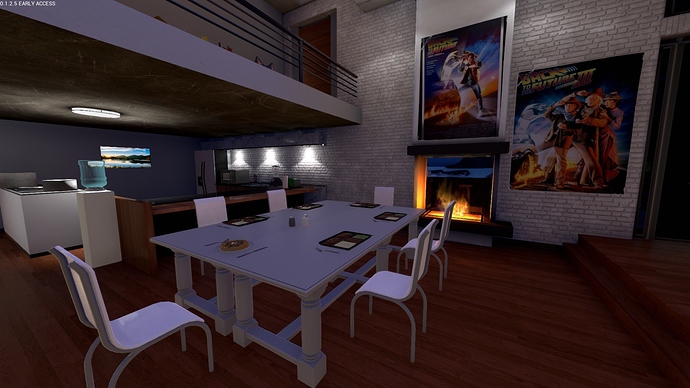 I decided after having my bar area be attached to the kitchen to actually make this a proper dining area, completely with a waffle and TV dinners. 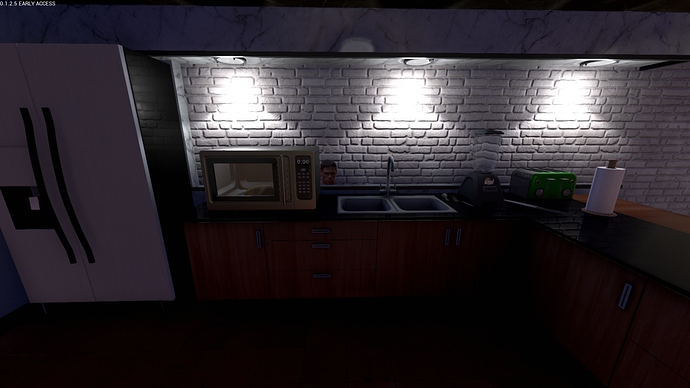 My kitchen is rather normal, sporting a microwave, blender and toaster, as well as a paper towl holder, not much else really notable here. There is stuff in the fridge, it’s all blender ingrediants, soda, and like 2 potatoes for some reason. 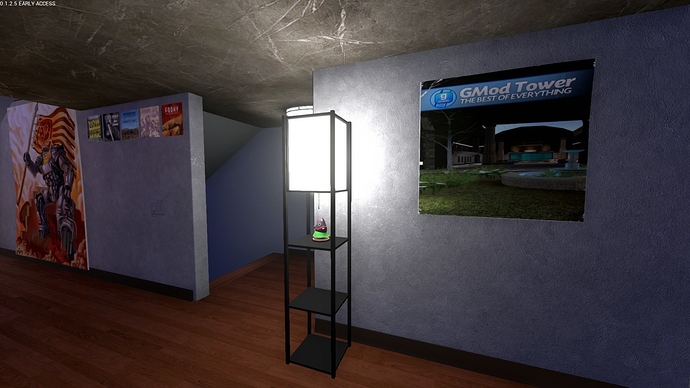 The wall opposite of the kitchen to the basement has an old Gmod Tower poster, the music singles from the music store, and a canvas with a picture drawn by a friend of mine. 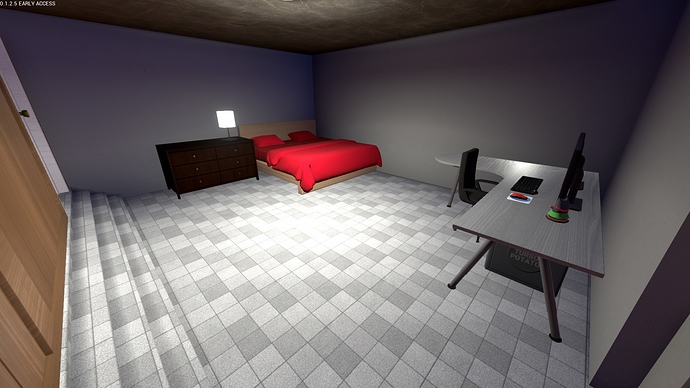 Right up the stairs in the first room on the left I’ve made two rooms for my friends if they ever get the game, I had originally done this style of thing as far back as Lobby 1 when my friends played that. Thank Christ for the item snapping, otherwise I’d have a stroke. 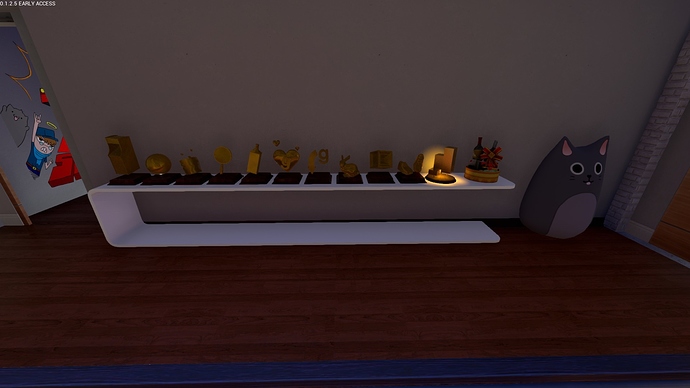 On the walkway on the second floor I decide instead of having the trophies on the kicthen counter I’d dedicate a bookshelf to them somewhere else, and I think it came out nice and neat, with the donator wine at the end, as well as a catsack. 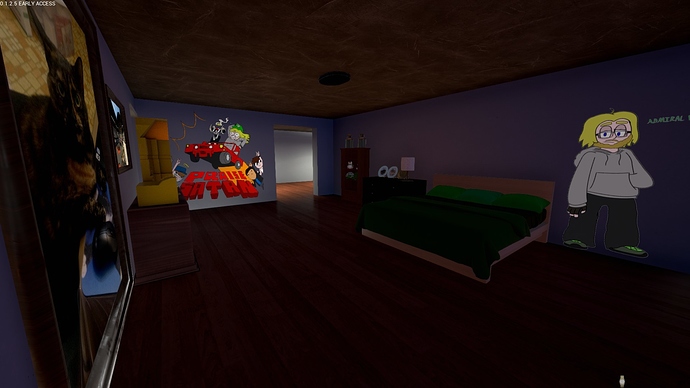 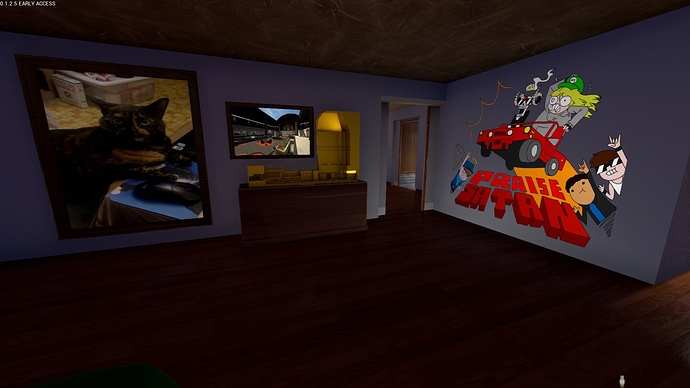 Next is the master bedroom which I’ve decorated with the lobby 1 trophy and an old image of lobby 1 (This in particular is a direct copy from another thread that did the same thing but their living room, I just thought it was fucking awesome and had to do it myself) Decorating the room picture wise is an image of my cat, and image drawn by my friend with the line art done by me (the praise satan one) and a self portrait of me in my rusty style of drawing. The lobby plates are on the nightstand, and the book shelf has stuffed animals and bottles on the top. 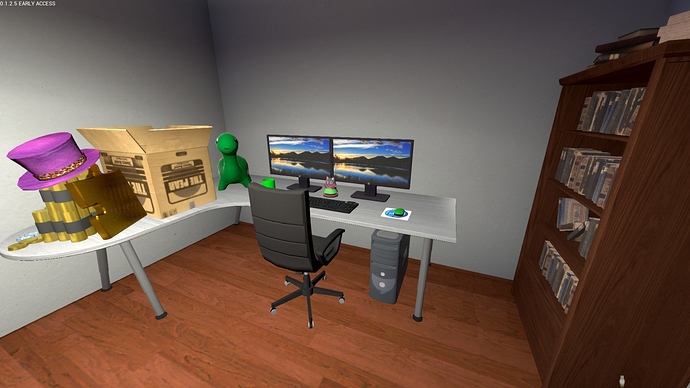 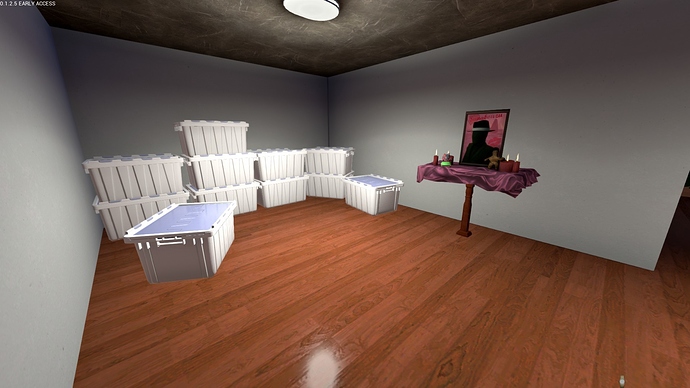 The room to the side of the master bedroom is both an office and a storage area, with boxes on one side and a desk on the other. Most of the old gmod tower items are stored here. Gives you that feeling I’ve moved in not too long ago and still haven’t unpacked everything. 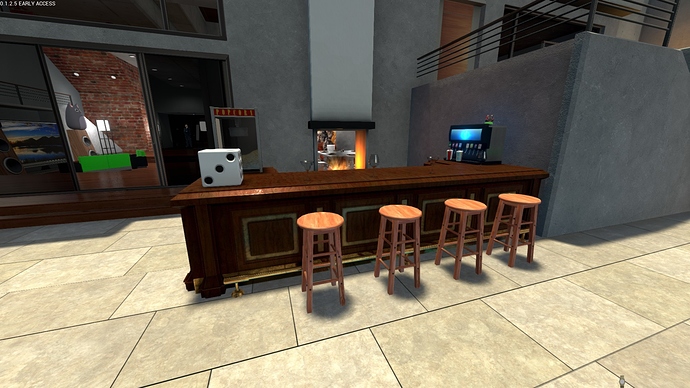 As I mentioned earlier I had my bar attached to the kitchen, but decided to move it somewhere else. All it needs is a roof in case of rain (if that’ll ever be a condo effect anyway) There’s also a butten on the other side of the bar, possibly for roudy customers or something. 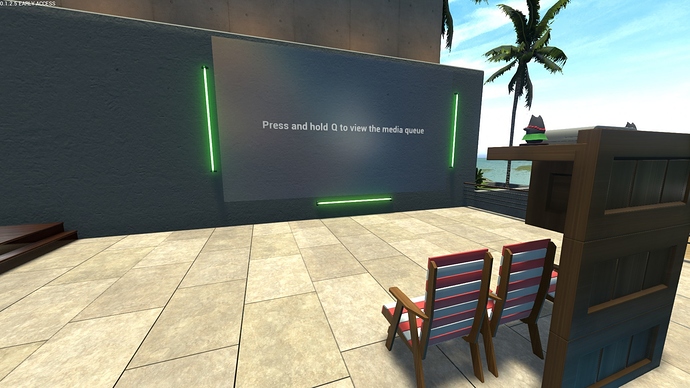 The outdoor projecter are only really exists because I already made that one side room an area for friends and not a home theater, and I lacked a proper flat wall to project videos on inside. it’s pretty nice to turn the condo to night and then just watch some videos or listen while you decorate inside. 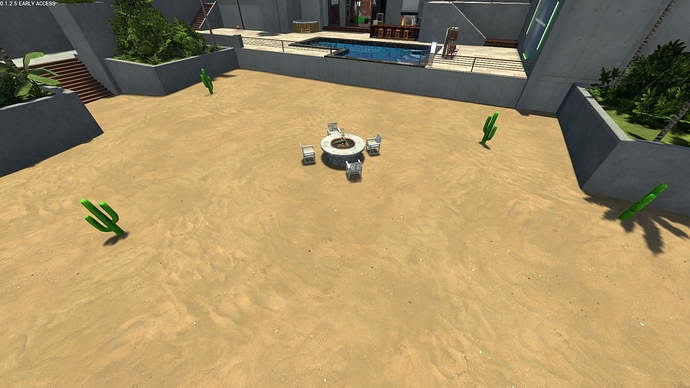 Like most people have probably done after winning 20 hula dolls and cactuses from spin the wheel, I’ve decorate my beach are with them, as well as setting up a bonfire area. 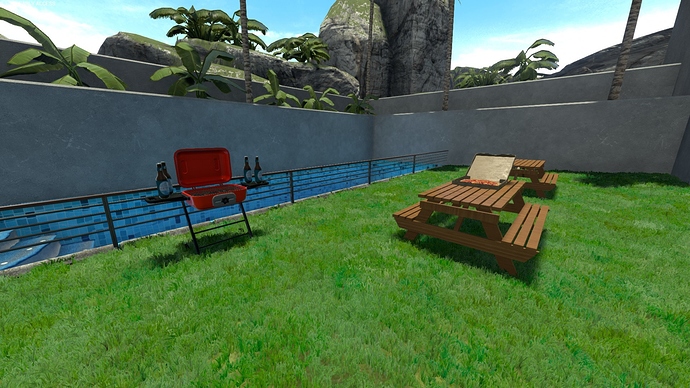 I have a barbique and picnic area on that little grassy area outside to the right when you enter the condo, I’m pretty sure the one time I was decorating while my condo was public, someone came in and ate a slice of that pizza. 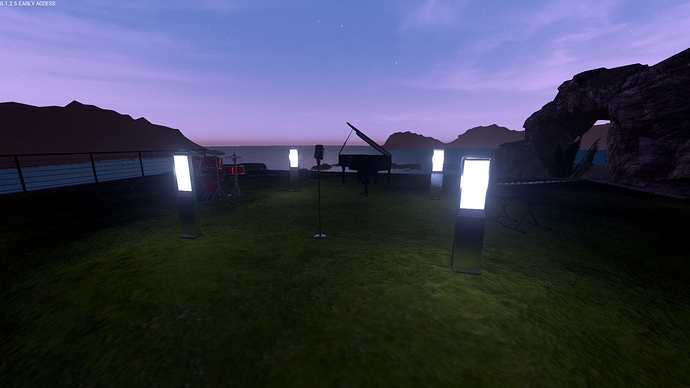 I still need to tweak the set up, but I decided to put my instruments on the grassy roof with some lights for those late night jam sessions. 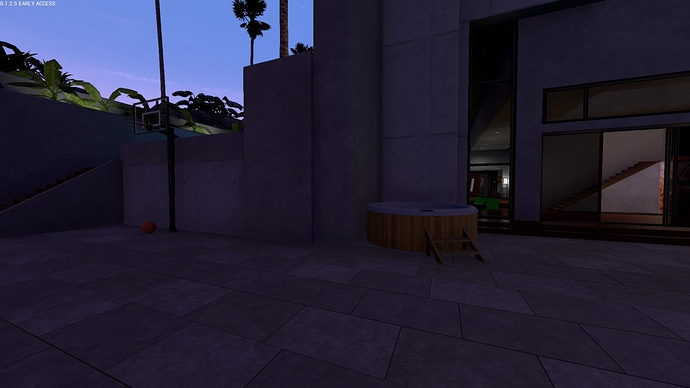 And lastly I got one of those wooden hot tubs right outside into the main pool area, as well a basketball hoop just so that space isn’t empty.

Hope you enjoyed some of the images I’ve shared here, if you have any tips on things I can improve, please feel free to mention them, because I feel like I design my condo rather blandly compared to others, or really I just lack the eye for that sweet ass designs people have been coming up with. Also the reason I never showed the basement is because it’s an unfinished gag I’m too lazy to get the Units to complete