Alright alright. Before y’all start with the “What the f*ck is this guy on about now?” hear me out.

First of all lets give Credit where credit is due. @Lifeless and @Johanna are two exceptional mapmakers and honestly without em we wouldn’t have such wonderful maps.

That being said, I’m now going to take the liberty of kowtowing Emission through the dirt because there’s sh*t that I’ve got with this Vaporwave-reject map. (Sorry Lifeless!)

First, lets look at Waterhole, a favorite of mine: 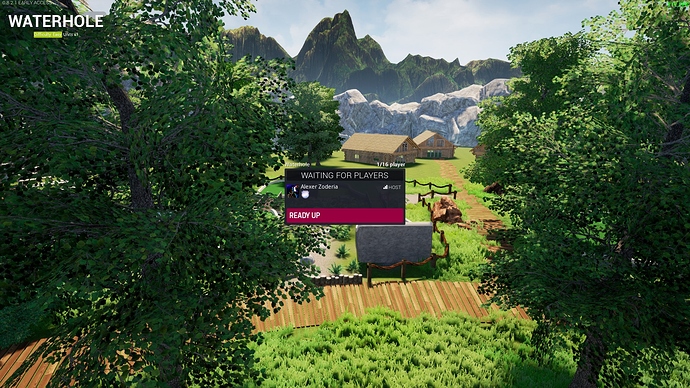 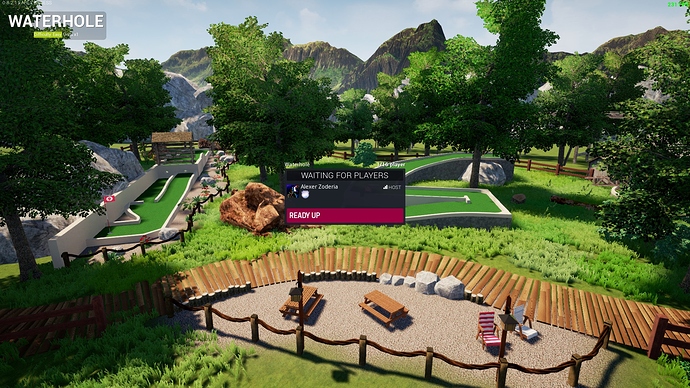 As you can see, Waterhole has a very interesting, unique art style reminiscent of a family-friendly minigolf course you’d find at like a campground or some sh*t. Its bright, green, and sunny. There’s even background area with mountains to give this map a bit more depth for its small size. 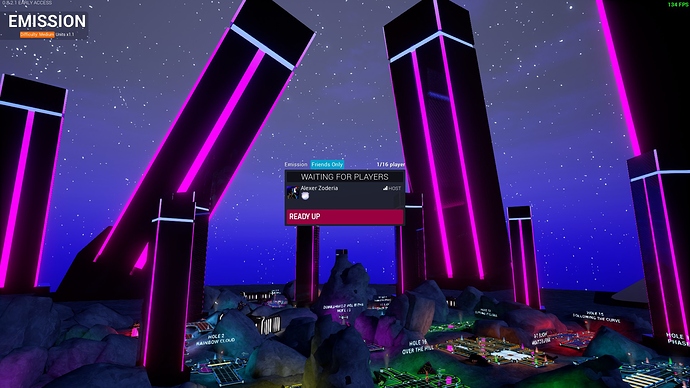 If we look past the menagerie of moving, rainbow TRON pillars, this map doesn’t have much going for it. While it has some rocks around the courses and the appearance of some kind of space asteroid, there’s no real depth to the outer bounds of the map, and it feels very shallow. 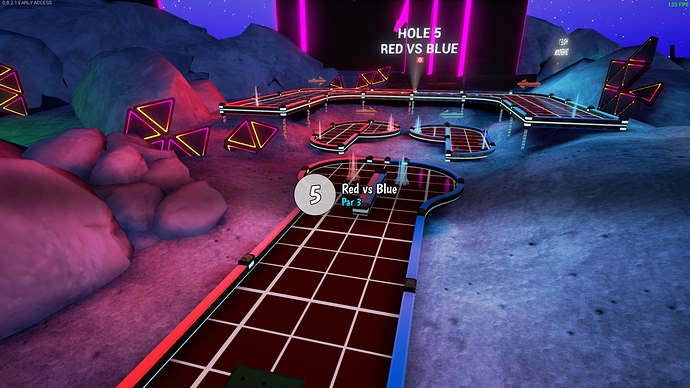 The courses for the most part look bland save for 1 or 2. Most have some kind of offhand name, and most of the time they don’t really come off as visually appealing.

First off: The Teleport. 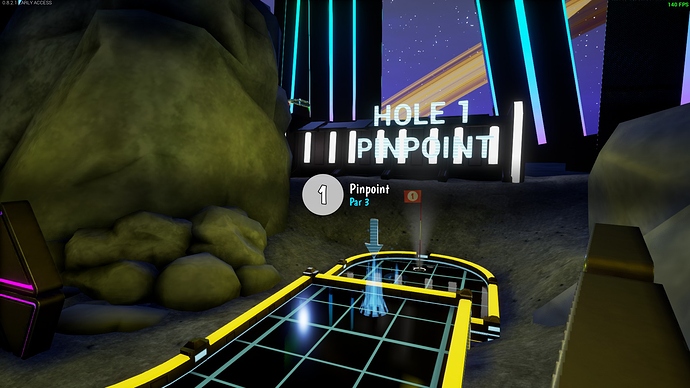 These Teleport points are in EVERY Hole. Most carry the ball through the way it was shot, but some have a fixed trajectory with no visual difference. There’s no real interesting way the Teleports are used save for a few later holes, since most are either an easy-to-get-to shortcut or a passing gimmick. 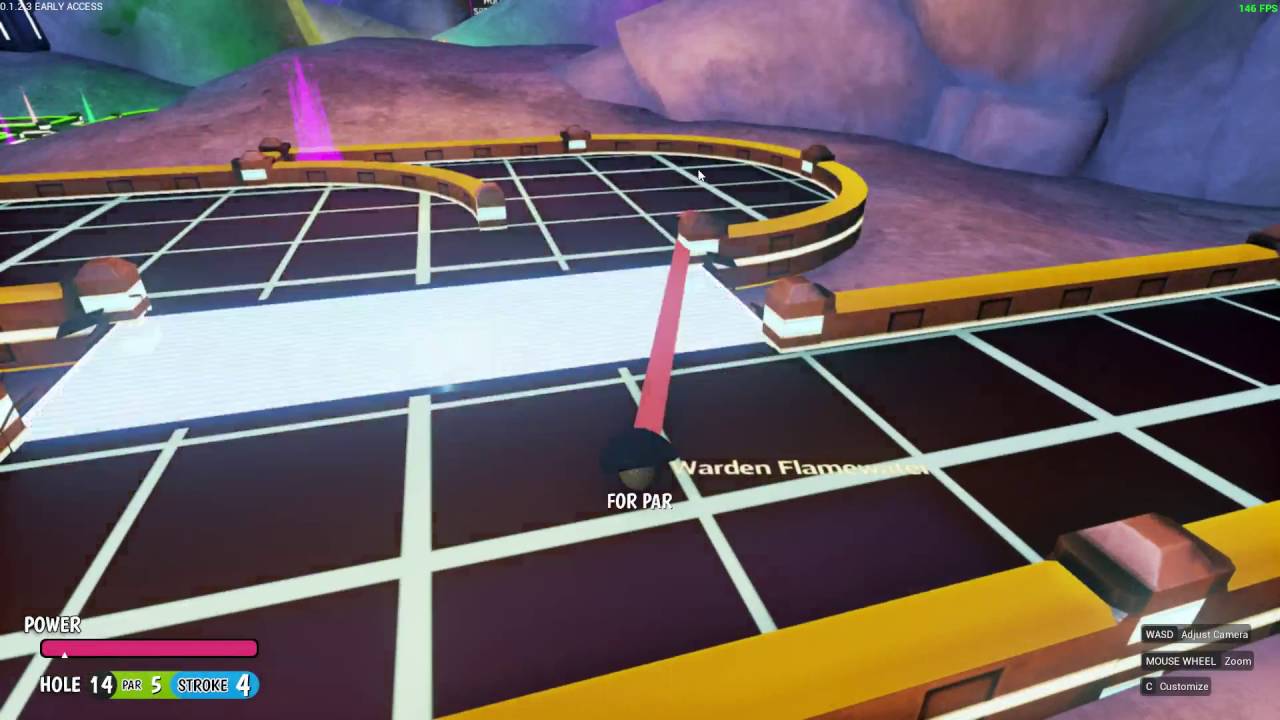 These also come up in nearly every hole, and while they’re put to use better than the Teleports, they still aren’t very interesting to me, as they’re all timing based. They’re also not very well smoothed with some courses, as I’ve hit stray edges and bounced weird when I’m connected to a host with high ping.

This is literally the ONLY Mechanic that I really think is neat for Emission, and only 2 holes use it: 13, as its ending coup-de-grace, and 18, as a Guaranteed HIO provided you don’t f*ck up your shot. I really hate that this feature isn’t used more in this map.

I’d also like to take a note and say that a lot of edges, corners, and holes are very buggy and often times can bounce a ball way differently than it needs to. Hole 9’s Hole in 1 has been broken for this very reason because the speed at which the ball exits the tele is too fast and it just skips around the hole.

With that being said, I’d like to propose changes for consideration:

And so concludes my rant. Now here’s the part where you get to leave your input! Do you agree? Disagree? Wanna burn me at the stake? Praise me as a god? Offer my soul to the immortal catsack guardians? Bequeath your answer below!

Yeah, I agree with a lot of this. The map has quite a few bugs that need to be tackled, such as the glitchy wall curves for example. Not only that, but this map is also not visually appealing to me. Altitude I used to think looked pretty bad in my opinion, that is until the redo which I really loved. I think Emission should get the same treatment as Altitude so it would look a lot better. And as stated earlier, there are a couple of bugs that need to be fixed.

On the other hand, I personally really like how Emission looks and feels. I don’t think it needs a major rework on the scale of Altitude, but a visual upgrade on the scale of Alpine or Garden where they were simply given better detail and made higher quality would be perfect. That said, I would like the wall geometry along with some of the other buggy parts to be fixed. Better visual indication for which teleporters launch you in a set direction and which ones maintain your momentum would be nice too.

I wouldn’t mind if some of your other suggested changes make it in, but I don’t necessarily think they are needed either. At the end of the day, if it ends uo being more fun I’m happy either way

While im aware of the visual side of things (I decided to make this map in only 2 weeks, never again…), are there specific curves that people are having issues with? I spent some time a year or so back trying to fix these curves and as far I was aware they were mostly fixed within what I could personally do (minigolf physics be cray yo). Im wondering if ive missed some curves.

I did just test some of the map in the editor now and didnt seem to experience any weird bounces except on Hole 9 where I have missed the curve into the hole.

If people could tell me which curves with pictures, or videos of what actually happens (videos preferred) that would be great.

I’ll just pop in to say that I’m pretty good with Emission in most senses (I certainly prefer it to Kingdom), it could use visual touch ups like Garden/Alpine (The curve friction thing too, though I actually didn’t notice myself until it was mentioned here), and one thing I haven’t seen mentioned here is the bridges sometimes having weird collision where they meet the normal map, and teleporters having inconsistent speeds, but these are sort of par for the course (Heh) with many minigolf maps.

I’ll record a playthrough next time to show you what I mean. The course also seems to have less friction then normal because it feels like it takes longer for the ball to stop rolling or slow down.

To add on to that, it feels like the ball also accelerates when you go along the curve.

I’ve personally tried to go for WR on Emission before but had to stop attempting that because my frustration became too big.

In all my playthroughs of Emission the curves have never been a problem for me. Those light bridges though, fuck them. They are so utterly broken and unpredictable and have straight up ruined a couple of otherwise perfect runs.
In case you don’t know what I’m talking about: Your ball sometimes randomly decides to bounce on thin air while going across a perfectly straight light bridge, causing it to lose all of its momentum and stopping on the bridge; which is a guaranteed out-of-bounds.

A prime example for this is on Hole 7, the very first bridge. After shooting your ball into the teleporter, it will often bounce on nothing while going across the bridge, causing your ball to stop.

Hole 16’s bridge overlap bug has been fixed in a previous update, which means the eagle for it is only possible with a buggy teleportation. I am yet to get hole #9 HIO, largely due to the fact that I gave up after hole 16’s edit, and also that hole 9 is still somewhat buggy too. A remaster will benefit this map greatly.