But first, we need to talk about parallel universes

Science in videogames is close to going too far…

Someone’s got to try this in Tower Unite to see if getting to a parallel universe is possible.

In all seriousness, I did get a basic understanding of how collision detection works through watching this video. What did you all think about this video? Has videogame science gone too far?
3 Likes
Advanst July 13, 2016, 5:54am #2

I honestly think this is a really good video, and I usually watch it whenever it’s brought up. If there’s one thing I love, it’s breaking the fricking hell out of games for the sake of beating them in ways they weren’t meant to. That’s kind of a reason I prefer watching some older games be speedrun is because of all the gamebreaking bugs and stuff, but newer games seem to break in more catasrophic ways, which is always fun c:

I love Panenkoek. He’s an incredible YouTube creator. This video spawned my favorite meme in recent history and I fully enjoyed the meme AND the source content immensely.

I see this as just one more reason I hold great respect for speedrunners. It’s not just about being fast at the game, it’s about figuring out what makes the game tick. Once you know how things work, you can break it in extraordinary ways to your benefit. Even though this isn’t particularly quick (let’s just run against this wall for a couple days), it does accomplish the goal doing a challenge that should be impossible. As the video clearly shows, there’s a lot more than just jumping at the perfect moments.

This is another speedrun commentary I thoroughly enjoyed: Half-Life 2 Done With a High Magnitude of Velocity. It’s an hour and thirty minutes in length, but I thought it was worth the watch.

Someone’s got to try this in Tower Unite to see if getting to a parallel universe is possible.

The reason these “PUs” exist in SM64 is because the floor detection is always within simple data type boundaries, but the actual worldwide position is a complex data type. He starts to explain this around 10-11 minutes in if you want more details on that, and he does a pretty dang good job at it.

Now, the only way that PUs could exist in TU is if floor detection and world position used this same matchup, with floor detection being a simple data type (like an integer) and world position being a complex data type (like a float or something). I doubt this is the case, because UE4 supports much, much larger maps than SM64 did and they’d need a bigger area for floor detection, but I’ve never really used UE4, so what do I know? The only way we’d know for sure is if a developer (or someone who really knows the engine) came to this thread to tell us.

Alternatively, I did find this Collision Overview documentation in Unreal Engine 4 that may have the answer buried deep within, but I kinda don’t wanna read it right now. Maybe some brave soul would venture in to see if it tells us outright.

Yeah, after a while of thinking about it I figured it wouldn’t be possible. At the very least I suppose it would just under/overflow the coordinates if the player went far enough.

I spent a good while running outside the condo, to see how far away i could go, and it eventually just crashed. I think the whole PUs thing, was coded in as a way to keep the game from crashing, when dealing with certain numbers, and just happened to create the whole parallel universe thing. I could of course have ran past several PUs on my way outside the map, but i don’t think so.
Image related, i was running towards the sun 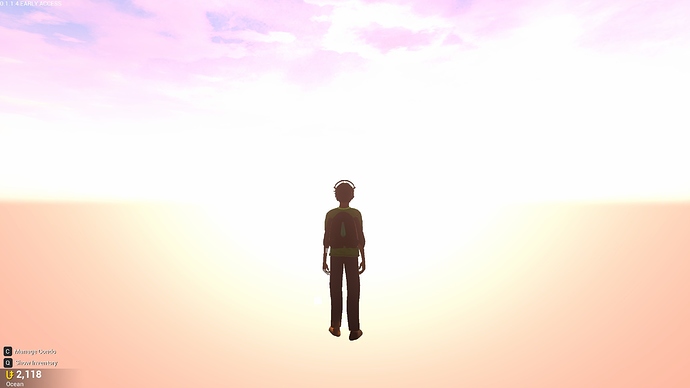