Right now, if you want to view the users you have banned, this is the menu we have to work with: 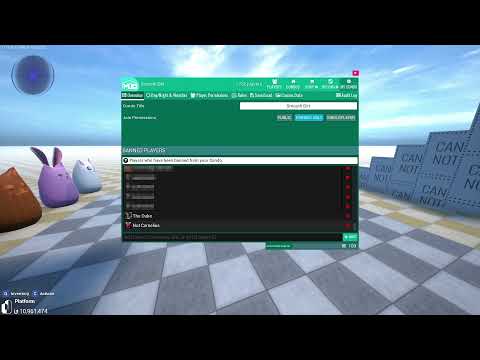 It’s just a super basic list of the players in your TowerBans.ini file with their Steam profile picture, username, and an unban button. I think it’d be nice if you could view things like when their ban expires and the reason you had banned them in the first place. Like- I have hundreds of people banned, it’s hard to tell why who is banned for what, and it doesn’t help that things like profile pictures and usernames can be changed, meaning if you really want to keep track of who you have banned you gotta make a little spreadsheet on the side or something.

The time the ban expires is already saved in the TowerBans.ini file, so I feel like converting and displaying the Unix timestamp for their unban wouldn’t be that hard, but also idk I’m not a developer. 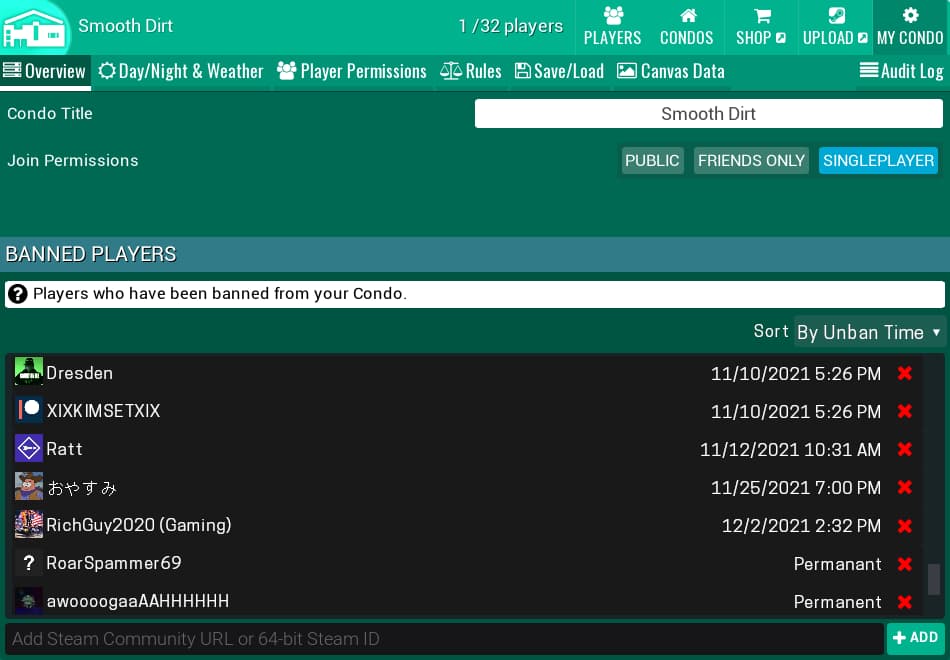 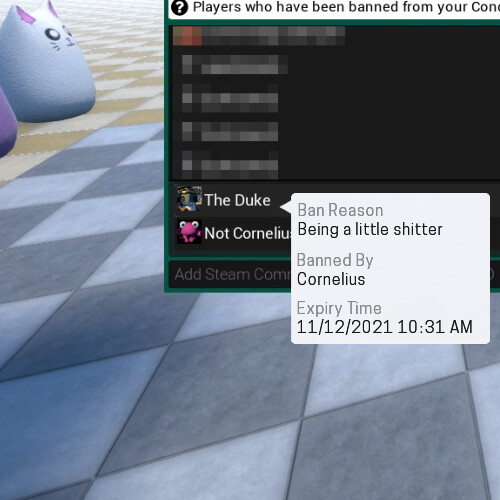 We already have the audit log, which shows when and why people were banned-

image950×176 21.7 KB
-but as far as I know this isn’t saved anywhere and is cleared when you exit the condo. It would be nice to access this kind of information long term, like if out of the blue one day you get a message someone and they’re like “Dude, why am I banned from your condo?” and you honestly don’t remember that they nuked an orphanage like three months ago. Having the reason you banned them saved could also fill them in on why they’re banned in the first place, as that information available means it could be sent to them when they try to join. You could include something like a ban appeal form in the ban reason, preventing you from having to directly interact with the user, which would be nice.

Having a better way to be able to sort and log this information within the game would be a nice QoL feature for people who thoroughly moderate their condos. I can also see this being useful for when Community/Dedicated Condos come out and people start building sub-communities around those. Having this as a way to overview moderation of those would be useful since the log files for dedicated servers can get sorta lengthy, and I assume they’d be easier for the average user to look through seeing as a Tower.log file for a server that’s been up a while can be massive because of global chat getting written to the log (4236 Global messages vs 80 Local messages in a 9 hours span 8150 line long Tower.log file). That could get changed or simply not be the case whenever Global Chat gets reworked, but that’s just an example of a future application for this. I’d assume this would also be applied to the Content/Blocked Players version of the ban list as well.