I don’t really know where to post this, but I can hardly play the arcade due to people just spamming E when I’m playing games like dizzy. Basically I waste all my tokens just to have some one literally steal the built up jackpot from me.

Well seeing as I’ve played certain arcade machines like 15 times at most cause I press the button like 2 times and have some one spam E and get the jackpot, then in the next 3 times I try the same person does the same thing. It is not fun, I played GMT and have played tower unite since around it’s steam release, and it very much rurns me off to certain games in the arcade. Why cant it just be like the casino? We can only hold 250 tokens any ways, so it’s not like any one can hog a machine any ways.

It really just seems like you can’t get the jackpot and you’re blaming it on bad game design.

No one said any thing about game design, it’s literally the players I’m having an issue with cause there’s no buffer to keep them from forcing me off a machine. So I just get to sit at a machine with like 3 people spamming E to try and get on it.

So you’re not hoping they change anything to fix this, you’re just asking the playerbase to never use your machines?

I agree with archedmaid, cant do it in the casino or anywhere else that I can think of. I’ve watched players move in when other machines were open. They stand and wait for the jackpot to get higher then spam E.

You can also sit in the casino forever without getting kicked off. It’s not a great analogy. The point is that everyone is trying to get the jackpot, so if you’re good at the game you’ll get it sooner and you won’t have this issue. Everyone is obviously going to try and get on the machine with the highest jackpot

Adding a buffer isn’t inherently game design, look idk why you’re in here arguing with me unless you’re one of the people doing it. Are you gonna be upset if they change it?

Yes, I am one of the people trying to get a high jackpot instead of going to another machine with a lower jackpot purely out of the goodness of my heart.

So you’re just watching other people play, and sharking them when they finally think they’re gonna get it. 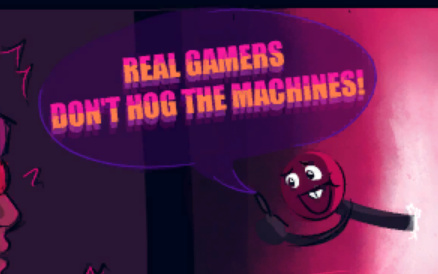 Yes I should be able to play until I’m done, not when you feel like it. If I were to run out of tokens, thats one thing.

There’s no reason you can only hold 250 token if you can get bullied and sharked out of the machines you’re using.

but they’re not your machines. jackpots don’t exist so that you can build them up and earn them back

Why are you so salty that people want a fair playing environment?

Right, and they’re not yours either to just play because you feel it’s your turn. He’s talking about a very specific thing here. SPAMMING E while somebody is occupying a machine, deliberately taking over and pushing a player off before they have a chance to put in more tokens. He’s not talking about walking away to come back and find somebody else has moved onto the game he was playing. It’s quite simple, WAIT YOUR TURN, or move on to an open game.

one thing is that it’s interesting how tokens are designed to stop people from continuously playing one machine, yet you can’t keep playing anyway because it kicks you off the machine every turn? and i feel like you should just be given a “Play again” and a “quit” option rather than having to spam E to try and get it before the people trying to take it from you. Since you’ll be forced to stop anyway by running out of credits anyway.

In real life you’d be forced to stop playing when you run out of money and that feels like how Tokens are designed to be, yet aren’t as effective in a virtual environment and people can just activate the machine if they wait and after you finish a game.

Maybe allowing someone to play up to 5 games before getting kicked off the machine with a 2 sec cool down before you can enter the machine again?